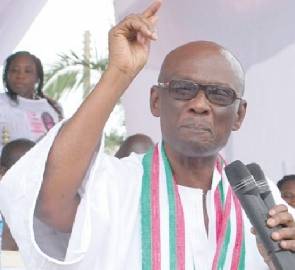 Speaking Wednesday in a radio interview, Delle stated that the CPP was disappointed and shocked by the disqualification of the three Nkrumahist parties hoping to participate in the forthcoming election.

“This is the moment to show solidarity with each other.”

He, however, pointed out that their disqualification even though unfortunate provides them the opportunity to come together as Nkrumahist parties dialogue and unite ahead of the December 7 polls or the next four years.

“We should learn from our mistakes,” said Delle adding that “it is not in our interest as Nkrumahist parties to walk on separate ways. United we stand, divided we fall.”

“This is the moment for our brothers and sisters of Nkrumahist lineage to go back to the drawing board and see whether we can talk together and see the way forward, just in the event that there are not cleared by the courts so that they can come solidly behind us,” said Delle.

The EC on Monday 10th of September at a press conference addressed by its chair, Charlotte Osei announced the disqualification of the 12 presidential hopefuls in the forthcoming election.

The 12 included Dr. Paa Kwesi Nduom of the PPP, Edward Mahama of the PNC and Hassan Ayariga of the APC.