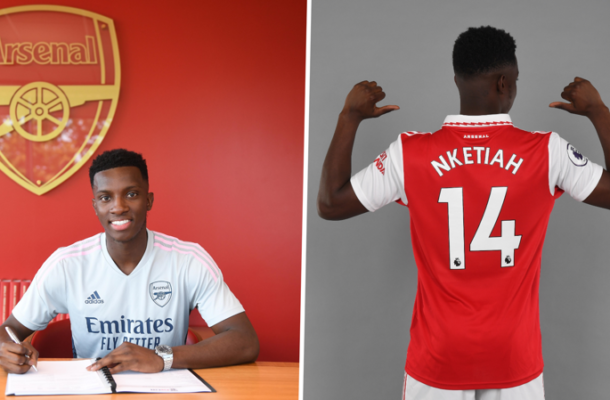 Ghana target Eddie Nketiah has signed a new five-year contract extension with English giants Arsenal ahead of the new season.

But the English-born decided to ditch the number 30 jersey he wore for the club's iconic number 14 jersey that has been worn by Thiery Henry and the likes.

The 22-year-old striker's contract was set to expire at the end of the month but the gunners have been able to reach an agreement with the striker.

There was a lot of uproar about why Mketiah will decide to pick such a jersey number as it will put a lot of pressure on him.

On that decision, a confident character added: "I joined the club at the age of 14, I wore 14 on loan at Leeds, and I even lived at No 14 at one point.

"When the opportunity came up to take it, it was hard to say no. I know what it means to the club and the fans. It’s a nice feeling, an iconic number.

"We know it is a special shirt and Thierry has made it cool to wear this shirt, just like he did with long socks and gloves. It is what we have grown up with. I am just trying to be the best version of myself. I’m focused on creating my own memories in that shirt, leaving my own stamp on it."