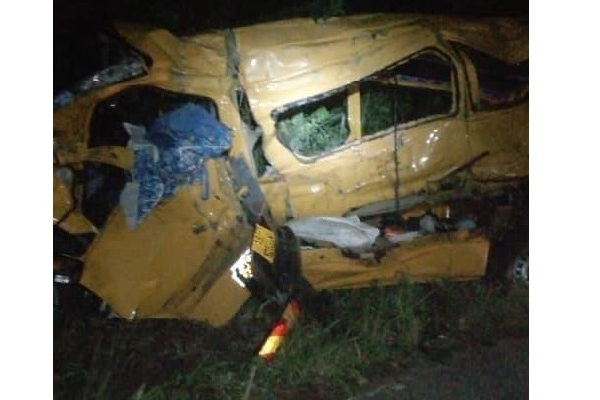 Eight (8) persons have lost their lives in a fatal accident on Accra to Kumasi Highway.

Three (3) persons who sustained life-threatening injuries are on admission.

The fatal accident occurred Tuesday evening around 8:30 pm on Akyem Anyinasin stretch of the highway which is a few Kilometers away from Akyem Asiakwa junction in the Eastern Region.

The Kibi Divisional Commander of Motor Traffic and Transport Department(MTTD) DSP Henry Agyemang explained to Starr News, two Mercedes Sprinter Vehicles were speeding from Accra direction towards Kumasi in the evening but upon reaching the section of the road bumped into a fully loaded Cargo truck which had developed a mechanical fault in the middle of the lane.

The first driver of Sprinter Bus managed to drive past it but the second vehicle closely following the first Vehicle crushed into the Cargo truck with registration number, AS 5280 – N which had the driver of the truck and a mechanic under it fixing the fault.

He said, the Sprinter driver and three other passengers out of eleven (11) onboard died on the spot while the driver of the Truck who was helping a mechanic fix fault on his truck was killed.

DSP Agyemang said, three (3) out of the other injured passengers rushed to Engresi Government Hospital died upon arrival. The deceased included the only female passenger who was in the Sprinter Bus.

Two of the injured passengers are in critical condition but the passenger who was seated at the front of the Sprinter Bus has been treated and discharged helping police with the investigation into the cause of the accident.

Body of the deceased persons have been deposited at the Kibi Government Hospital morgue.

Meanwhile, the local Police personnel worked tirelessly throughout the night till the next morning to ensure that the injured are saved while the 8 bodies were properly preserved, while the road was also cleared.