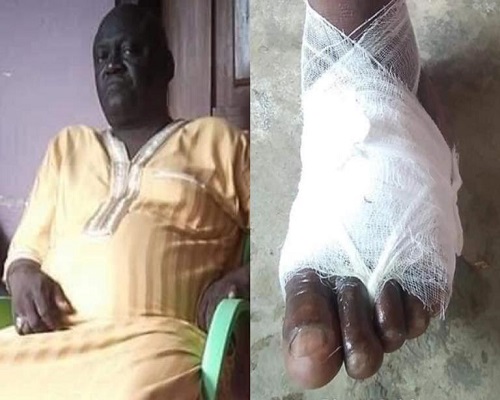 Tension continues to rise to dangerous levels at Ejura in the Ashanti Region over the physical assault on the Member of Parliament (MP), Alhaji Mohammed Bawa Braimah, by suspected hoodlums of the New Patriotic Party (NPP).

The MP was ambushed last week while on his way to some communities in the constituency to monitor the ongoing voter registration exercise.

The NDC MP was beaten by a group of unknown assailants as he was distributing food to his party agents at Kasei Nkwanta, one of the registration centres

The MP was slapped and kicked repeatedly until he fell to the ground by the hoodlums who appeared from nowhere.  He suffered varied injuries including a broken toe and was rushed to the Ejura Government Hospital, where he has since been treated and discharged.

“My toes have broken, campaigning ahead of the 2020 election would be difficult”, the MP lamented to mynewsgh.com

The NDC in the constituency issued a week ultimatum to the police to arrest some individuals they had accused of being behind the brutal attack.

The opposition party accused the Municipal Chief Executive(MCE) who doubles as the NPP parliamentary candidate, Mohammed Sualisu Bamba of engineering the attack, and threatened a retaliation should the police failed to arrest the attackers.

However, after of a week of no police action, mynewsgh.com sources in the volatile town indicate some youth are planning to carry through their threats to revenge the attack on the MP.

The police and the soldiers are all here when they attack our MP and father, what have they done?” one of the youth quizzed angrily.

“We can’t sit down for Bala and Afoko to attack the MP. You wait, you would here from us soon. Bamba and his boys would definitely here from us”. They added.