Election of MMDCEs comes off in 2021 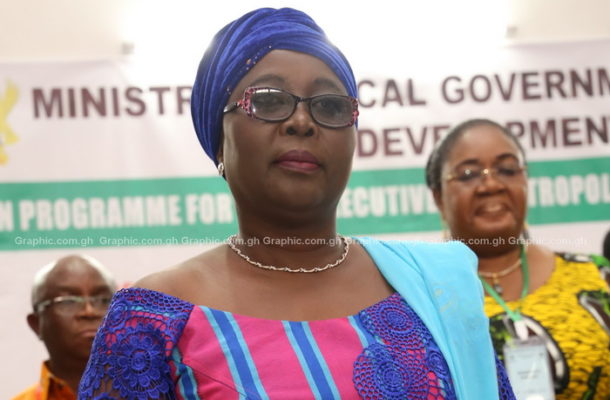 The Minister of Local Government and Rural Development, Hajia Alima Mahama, has indicated that the election of municipal, metropolitan and district chief executives (MMDCEs) will come off in 2021.

She said this when she shared a tentative timetable of the activities of the Ministry of Local Government and Rural Development (MLGRD) towards the election of MMDCEs at a round-table discussion organised by the Centre for Local Governance Advocacy (CLGA) and the Inter-Ministerial Coordinating Committee (IMCC).

The round-table was on the topic, “Election of MMDCEs in Ghana: How do we operate a decentralised governance system with an elected MMDCE on partisan basis?”

She also gave an assurance that although the election of MMDCEs would mean the whittling away of the President’s enormous executive powers at local levels of governance, he was committed to giving up that power to deepen democracy in the country.

Responding to questions about the processes towards the election of the local executives, Hajia Mahama said the Constitution detailed the processes for a referendum.

Going by that, the ministry was currently sensitising and engaging Ghanaians to the issue.

Subsequently, the Attorney General’s Department will draft the bill that will be forwarded to Cabinet and then to Parliament.

Thereafter, the bill will be gazetted for six months before the referendum takes place sometime next year, during the district assembly elections.

Hajia Mahama said that would pave the way for the necessary constitutional changes in 2020, culminating in the election in 2021.

She conceded that there were key policies, legal and administrative changes that would go with electing MMDCEs and, therefore, urged participants not to be sceptical about the idea, but to raise all issues they had about the policy.

A governance expert, Dr Eric Oduro Osae, pointed out that since the Fourth Republic, the country had never managed to field vulnerable groups into chief executive positions at the local level.

The election of MMDCEs, therefore, could help correct some of the imbalances in positions at that level.

The Director of European Studies at the University of Ghana, Professor Ransford Gyampo, raised his scepticism over the commitment of politicians to elect MMDCEs as those positions were usually reserved to reward supporters of the party in power.

The Head of the Political Science Department of the University of Ghana, Dr Bossman Asare, also emphasised that referendums presented great opportunities for citizens to shape their democracy.

He, therefore, urged all to take an interest in the policy.