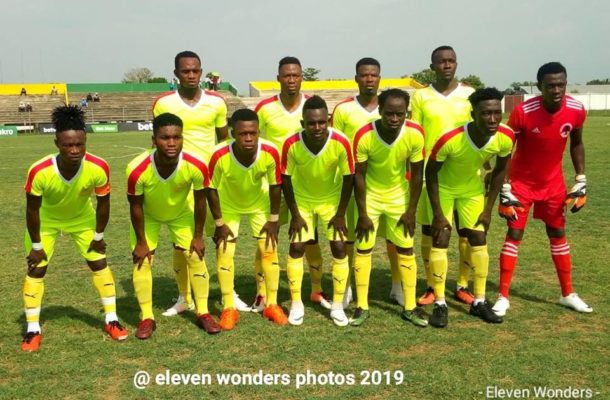 Eleven Wonders made the headlines this week after supporters of the club invaded the training ground to stop their coach from training following a string of poor results.

The Techiman side have since asked Ignatius Osei- Fosu to step aside - with this development, Wonders head into the clash with WAFA without a substantive coach.

Their last League triumph dates back to March 7, 2021 when they beat Legon Cities 1-0 at Ohene Ameyaw Park to wrap up the first round.

Kwame Karikari’s solitary strike caused their 1-0 defeat to Liberty Professionals in a match day 19 encounter to drop further down the League log – 15th with 22 points, only one point above the bottom three clubs.

With a record of three away draws in the season, Wonders can aim for a point against a side that have not been overly impressive in recent weeks.

WAFA are 11th in the table with 26 points – 4 points richer than Eleven Wonders and with a very strong home form, the Academy boys will start as favourites.

They have yet to lose a game at the Red Bull arena in Sogakope - winning six and drawing three in their last nine outings at home.

Six first team players including Daniel Lomotey have departed the Red Bull arena for greener pastures – a phenomenon that affects their outputs every season.

Lawrence Agyekum’s first half strike was all they needed to beat Bechem United 1-0 on match day 19.

The last encounter between these sides ended 1-0 in favour of WAFA at the Ohene Ameyaw Park in Techiman.