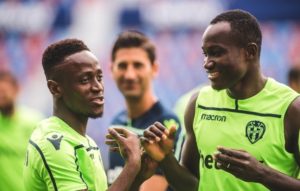 Levante UD has announced the list of 19 players who will travel to Pucela to face Valladolid on Thursday.

Ghanaian striker Emmanuel Boateng has been named by Paco López in the squad and is expected to play a key role for the frogs tonight.

Meanwhile, Compatriot Raphael Dwamena has been left out again for a third consecutive matchday squad after missing out on Espanyol and Sevilla.

The 22 year old joined the Valencia-based club on a four-year deal from Swiss club FC Zurich this summer and is yet to cement his place in the team.

Valladolid are looking to earn their first victory of the season for their fans. They are up against a Levante side that were defeated by a single goal in their last away trip to the RCDE Stadium – but their last memory of the Zorrilla was a 4-0 triumph.