We have enough biometric machines for December polls - EC 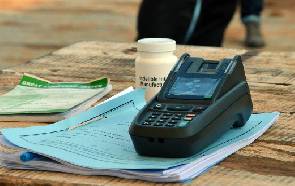 The Electoral Commission has said it has enough biometric voter devices for the conduct of the December general elections.

This follows claims by the Coalition of Domestic Election Observers (CODEO) that there is a possibility of the biometric devices malfunctioning on Election Day.

CODEO in its report after monitoring the just ended voter verification exercise nationwide said about 6% of exhibition centers had their devices malfunctioning.

But speaking on The Big Issue on Saturday, Head of Communications at the EC, Eric Kofi Dzakpasu said because they anticipated such eventually, they have procured 78,000 biometric devices to serve the 29,000 polling stations across the country.

“We have acquired 78,000 biometric verification devices and every centre had a backup. We had backups at the regional offices and backups at the district offices. There were three technicians around the exhibition centres based at electoral area centres constantly monitoring these devices to fix them where possible in the event of any defect.”

Mr. Dzakpasu said places that experienced faulty biometric devices during the voter verification exercise were checked and those that needed to be changed were done.

“We took remedial measures at places that experienced such defects so CODEO should have highlighted whether remedial measures were taken when these devices broke down and whether at the end of the day the exercise went on with devices at the various places. aturally, we anticipated that there could be some of these challenges so there was this contingency plan from day one,” he added.