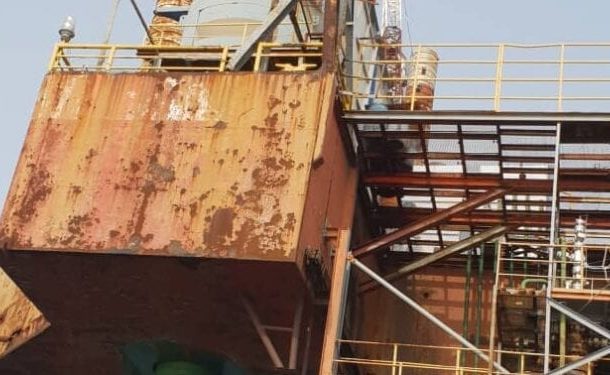 Energy think tank, the Institute for Energy Policies and Research (INSTEPR), has warned of an impending Environmental disaster at offshore Saltpond, in the Central Region of the Republic of Ghana.

The research body explained in a statement that Ghana is facing an imminent environmental catastrophe if the 65 years old Oil Rig, ‘‘Mr. Louie’’ is not decommissioned immediately.

The Saltpond field is Ghana’s oldest Oil field, discovered in 1970 and was operated by the Signal-Amoco Consortium.

“The field was producing an average of 400 barrels per day from two well when production started in August 2000, then dropped to around 150 barrels per day before operation of the oil field was halted on June 10, 2010 by the Ghana National Petroleum Corporation (GNPC).

“This company initially brought the jack up rig called ‘‘Mr. Louie’’ to drill six appraisal wells. In October 1978, the Jack up rig was converted into a production platform.

“The Saltpond field was abandoned between 1985 and 2000, until in August 2000 when rehabilitation works commenced with the repair of the ‘’Mr. Louie’’ platform by Lushann International.

“GNPC keep a skeletal staff on this platform and their lives are in danger should there be such an accident. This oil spillage will destroy the natural ecosystem of the area and makes the fish in our seas unsuitable for human consumption for years to come.

“It will also cost Billions of dollars to control the well and safely clean up the oil spillage as well as fines by international environmental agencies. Similar disaster was witnessed on television during the 2010 Oil Spillage in the Gulf of Mexico.

“The Institute will want to draw the attention of Environmental Protection Agency (EPA), GNPC and the Energy committee of Parliament to immediately supervise the decommissioning of this production platform ‘’Mr. Louie’’ before our worst nightmare happens,” the statement concluded.