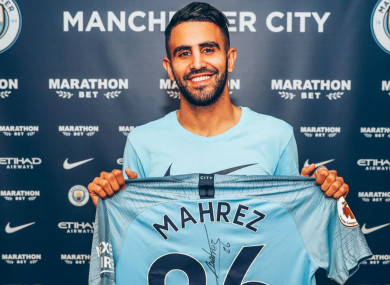 Mahrez was strongly linked with a switch to the Etihad Stadium at the end of the January transfer window following an injury sustained by Leroy Sane, but the move fell through.

City have now broken the club’s transfer record for the second time in 2018, the champions reported to have paid £60million for Mahrez, more than their previous landmark fee for Aymeric Laporte.

“Over the past few years, he has established himself as one of the Premier League’s most exciting players.

Mahrez won the Premier League with the Foxes in 2016.Source: Plumb Images

“We’re sure he will bring additional attacking quality to our squad.”

He will compete with Sane, Raheem Sterling and Bernardo Silva for a place in City’s powerful front line, with strikers Gabriel Jesus and Sergio Aguero also available.

“I am so pleased to have joined City, a side playing great football under Pep Guardiola,” Mahrez told City’s website.

“Watching them from afar has been a pleasure. Pep is committed to playing attacking football, which is a perfect for me, and City’s performances last season were outstanding. They’re redefining the English game and I wanted to be a part of it.

“I think we can be successful over the coming years and I believe my own game can develop under Pep’s management.”

Mahrez was the star man as Leicester shocked the football world by winning the 2015-16 Premier League title, claiming the PFA Players’ Player of the Year after scoring 17 goals to help the Foxes upset the odds.