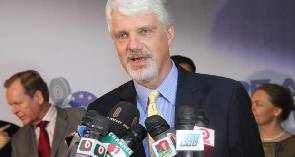 Ghana would have to wait for a complete exit of the UK from the European Union, before considering a renegotiation with the EU over the Economic Partnership Agreement.

This is the advice coming from the European Union Ambassador to Ghana, William Hanna.

Mr. Hanna believes it will be speculative for any such arguments to be pushed forward as it will take approximately two years to complete processes of UK’s exit from the EU.

“We are not there yet at all; this government has not yet decided or informed any group of what it intends to do in terms of a renegotiation so to speculate about that, is something I wouldn’t like to say,” he observed.

The EU Ambassador’s comments come on the back of the ratification of the EPA by the Parliament of Ghana.

The agreement will allow a percentage of exports to Europe from Africa and vice versa, free of tariffs.

Though Britain has voted to exit the EU, William Hanna tells Citi Business News, the interim benefits should rather encourage other West African countries to sign onto the agreement.

“The important thing about this decision is to ensure that Ghana’s industry and exports are effective; that is the key thing and what happens in the future, we would have to look at it.”

Meanwhile the EU says it will continue discussions with other West African economies to get them sign onto the EPA.

William Hanna believes since Ghana has already secured its position on the matter, it would be necessary to engage the country in convincing other economies to do same.

“In the meantime, Ghana has preserved its own position on the agreement and we will continue to work with Ghana to try and widen the agreement to make sure it covers all economies throughout the region,” he remarked.

Earlier, President Mahama had also intensified his lobbying to get other ECOWAS countries to agree to EPA
The final ratification of the EPA is expected to bring to rest the concerns of major exporters of possible job losses due to the high tariff charges on their exports and its effect on increasing cost of operation which will trigger a reduction in their labour force.

However civil society group, The Third World Network insists the agreement will be a disincentive to the expansion of local manufacturing companies.