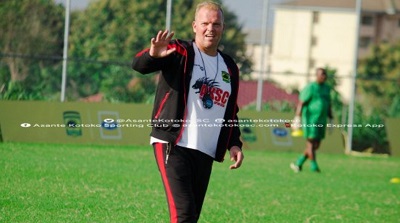 Former Kumasi Asante Kotoko head coach, Kjetil Zachariassen, has taken a french exit to his country Norway with the car and house keys given to him by Kotoko during his stay in Kumasi over claims of bonuses owed him.

The Porcupine Warriors mutually parted ways with the Norwegian after poor run of results and failure to achieve target given him by the club, but he has refused to handover the keys to the club's car and house meant for head coach's of the club.

According to Kumasi based Fox Fm, currently the car is parked in Ivory Coast and Kjetil Zachariassen has flown to Norway along with the car keys and that of the house, all properties of the club.

Kotoko after appointing Maxwell Konadu as the new head coach have to let the gaffer waits for some time before the car and the house are retrieved from the former Ashantigold SC trainer for him to use it for his duties in Kumasi.