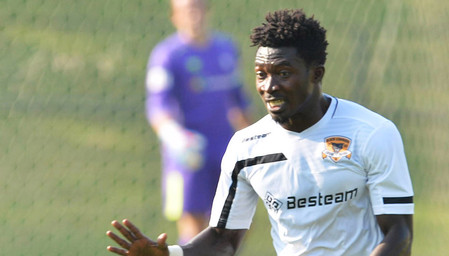 PRETORIA, SOUTH AFRICA - MAY 10: Mumuni Abubakar during the National First Division match between University of Pretoria and Black Leopards at Tuks Stadium on May 10, 2017 in Pretoria, South Africa. (Photo by Lefty Shivambu/Gallo Images)

Mumuni joined the PSL club in 2017 from South Africa Division One side Black Leopards.


The Ghanaian was sent out on loan to National First Division side Richards Bay FC in December last season, while the offensive-minded Japhta was sent to Mthatha Bucks.

According to a source, both men have since been deemed surplus to requirements in Bethlehem.

"Both Sello Japhta and Abubakar are not part of the coach's plan this coming season," says the source.

"They have both since been put on the transfer list."

Mumuni  was the captain of New Edubiase when the team won their first and only FA Cup trophy in Ghana and was also a key member of the Ghana U23 side that conquered Africa in the All Africa Games in Maputo in 2011.