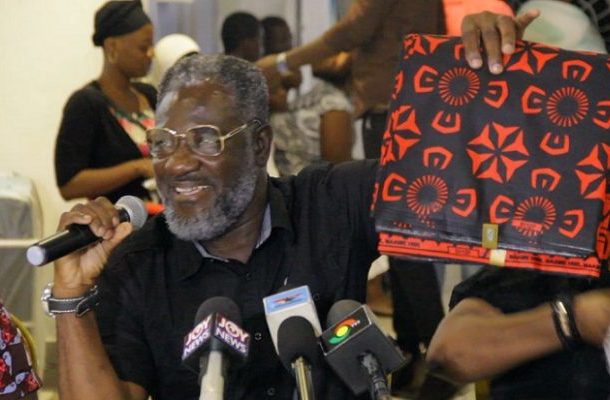 The family and management of late dancehall songstress, Priscilla Opoku Kwarteng, known as Ebony Reigns in showbiz, have unveiled GTP clothes which will be the official garment for the final funeral rites of the late artiste.

The cloth will be the official cloth for the funeral of the Poison hit maker slated for 24 March 2018 at the Forecourt of the State House.

The cloth was named after her hit song Maame Hw3 which preaches against domestic violence.

Speaking at the unveiling ceremony at the West Hills mall in Accra on 17 March 2018, father of the late musician, Nana Opoku-Kwarteng urged Ghanaians to patronise and use the cloth on all occasions so that the memory of his late daughter will continue to live on.

On his part, Ricky Nana Agyeman (Bullet), Chief Executive Officer of RuffTown Records, the label Ebony was signed on to, said the introduction of the cloth was in line with his artiste’s dream.

“We are doing this for Ebony Reigns. When she was alive, she was always with me. She told me most of the things she wanted to do. She wanted to have ‘Ntoma Collections’ because all the other musicians had casual wears. So it’s like a dream come through,” said Bullet.

Ebony died in a road accident on 8 February 2018 whilst returning from Sunyani to Accra after a visit to her mother. Her assistant and longtime friend Franklina Yaa Nkansah Kuri and soldier Atsu Vondee, her bodyguard, were also killed in the fatal accident.

The final funeral rites and burial service for the late Ebony, born Priscilla Opoku Kwarteng, will be held on March 24 at the forecourt of the State House in Accra.