FEATURE: Nii Lante's misophoniac ethics is football's newest buffoonery and his ministry has become a hub for whack football ideas 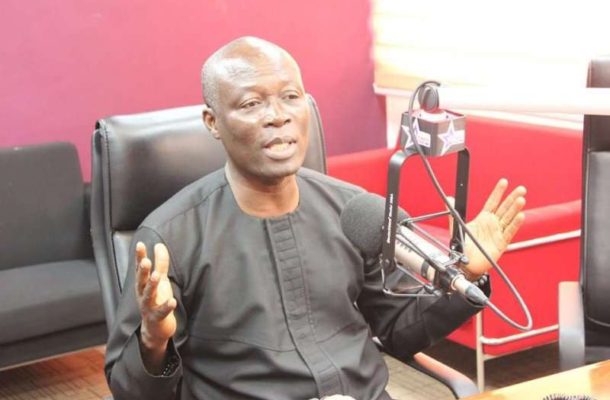 Needless autocracy and whack football ideas have become the order of the day at the corridors of the Ministry of Youth and Sports and Nii Lante Vanderpuije has become a new icon of buffoonery toying with just not football but sports in Ghana.

The highly inflammable and self-acclaimed politician has gone on one of his usual media tirade in flex and is threatening to block the Black Star's proposed international friendly with South Africa next week over appearance fee and standard of team grounds.

In his 'serial caller' style he questions why the Black Stars, at par with the likes of Cameroon and the Ivory Coast, should accept $150K as appearance fee while their border counterparts are taking in $350K in excesses.

While failing abysmally to bring policy ideas to the table, the cries from the former broadcast journalist is loud about a so-called no money syndrome, astute individuals in Ghanaian football society have questioned the government's spending policy. Nii Lante has simply lost his morales to question how his government is wickedly spending $504K on wrist watches while sports federations in the country are in dire financial suffocation.

Under his tenure, Ghana football has taken a backwards lopsided spiral and the future looks ever harrowing dark.

The public alterations between the Minister and the Ghana FA hierarchy is rising at higher crescendos and continues to act unprofessionally in his role.

In clear demonstrations, the emotionally-controlled man has shown he's not fit for the top job and his misophoniac radio outbursts means he lacks the ethical values required to steer affairs in the interest of Ghana sports.

While standard ethical governance principles require he dialogues with the Ghana Football Association bigwigs on issues pertaining to national team activity, he's often heard shamefully reacting to content of contracts and other official documents submitted to his office in the media.

In his latest radio interview, the minister has expressed his readiness to cancel the Black Stars' with South Africa's Bafana Bafana over what he claims to be a demeaning appearance fee. While he may be right to reopen negotiation over the fee, he has failed to take into consideration other crucial factors like the importance of the game to the Black Stars' preparations for the impending 2017 AFCON tournament.

George Afriyie, the Ghana FA vice President, has a salient point in reaction to the issues when interviewed by Accra-based Happy FM. While shouting about the so-called peanut paid by South Africa and asking for increament, Nii Lante's outfit should be prepared to bring AFCON standard countries to Kumasi or Cape Coast to help the Black Stars prepare for the upcoming tournament.

Supported by a group of nation-wrecking journalists Nii Lante has got the armoury to question the credibility and performance of Ghana FA. He has even gone ahead to attack the image of the Ghana Premier League, tagging it unattractive.

In the midst of the challenges gripping the top-flight league, it managed to record impressive numbers at the various stadia. The Ghanaian league is sub-brand of Ghanaian sports but the Minister has remained in Lalaland and tarnishing the image of the competition.

While his freewill of expression cannot be taken from him it remains imperative that the media players act the role of the fourth estate of the realm and do the necessary checks and balances.

It is by far the saddest that no media house has assess the performance of the Minister for the time that he has spent in that office.

The Ministry has had noble and hard-working politicians who put Ghana first and worked to develop the sport. The era of the New Patriotic Party government would always remain a cherished memory. Yaw Osafo Marfo, the late Hon. Kwadwo Baah Wiredu and E T Mensah left the ministry with dignity.

Nii Lante Vanderpuije has gone opposite their majestic directions and he has resulted abandoning the principles of consultative ideas to taking autocratic sole decisions, reducing other relevant stakeholders to mere dolls.

The ruling government is focused on retaining power which means the option of ministrial reshuffle is not viable.

A change of government would be idea to reintroduce sanity and seriousness to the sports ministry.

For Nii Lante Vanderpuije knows next to nothing about football.