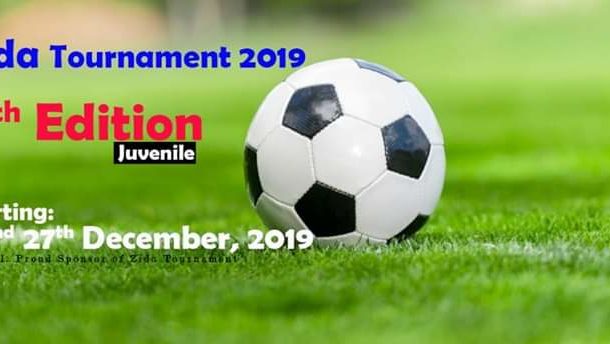 The most honoured and prolonged Juvenile Tournament in Ghana, Zida Juvenile and Women's Tournament has come a long way.

Marvelously enough, we are in the new era of Ghana Football. That makes the tournament a rememberable tournament in the country. Selfless Club owner Shaibu Salifu Zida has already shown the way, where we need to tackle our success from.

Having highlighted the need to offer attention to Young Talents, the astute Football man has being organising tournaments for Juvenile clubs and Women's teams in the Upper East Region.

Aim and objectives of Zida Tournament:

The tournament which has being in existence for Eleven (11) years, has it aim at ending various forms of social vices such as trauncy, drug addicts, robbery, Teenage Pregnancy, Early Marriage etc in the region. Seeing the growth in the aforementioned, especially in the North, we(organisers) intend to reduce it drastically. Asuch, the life of Zida Tournament.

It's Objectives: Zida Tournament projects to unearth Talents for the Upper East Region where vase land, boost of skills but due to insufficient resources most talents goes unnoticed.

"I was a player myself and it so happened that I was fortunate I had a job at my early stage, Government Department...It was difficult to play football due to my schedules but once awhile I go around to play"

"I equally realized that, it's through Football that I have gotten to where I am interms of Education, I got support through Football which helped me build my education structure very well. When my chance of playing got block, the way out to still be in the game, was to step into the managerial role and I did that".

"However, the other aspects of it was that my love for Juvenile Football was already there, upon several deliberation I decided to bring on board another Tournament which will be long lasting aside the Milo Games which was empowered by the FA those years. Because, there were not enough competition for the Young players, asuch was limited"

"With alot of reflexes, I had to give the younger ones the needed support in this catchment area, so I organized an annual competition dubbed 'ZIDA TOURNAMENT' which will bring the Juvenile Clubs together to compete. I believe my step was another way that would bring motivation to we the Managers"

Salifu Zida touched on how the Women's teams joined the biggest Juvenile Tournament in Ghana. "At a point in time, the Ladies clubs Virtually in the Upper East Region faded off, only the Juvenile male teams were alive until I decided to bring up the Ladies to the Tournament because the growing interest of Women's Football needed to be louded, so we in cooperated the Ladies into the ZIDA TOURNAMENT. Amid the name, Zida Juvenile and Women's Tournament"

With Zida's love and passion for Football, having been a player himself before with Upper Stars, he initiated a Juvenile Football Tournament aside Milo Tourney because he realized the Milo Tournament which was empowered by the GFA was limited, he intended to bring on board a different football playing platform to help nurture talents and keep their hopes(players) alive.

The Milo Tournament as at the time was played almost like Colts tournament, which was supported by the Ghana Football Association.

In order to bring the various Juvenile club's around to compete, he organized an annual tournament dubbed 'Zida Juvenile Football', however it name changed to 'Zida Juvenile and Women's Football' after it had arrested the attention of Ladies Club's in the Environment.

The above-mentioned tournament was put together a decade ago, precisely 2009 with less than ten(10) clubs participating.

One might be surprise, the multiple vision of the Tournament; To develop Young talents, To keep Colts teams alive and To motivate club administrators.

Surprisingly, in 2009 the Visionary football man had only six (6) clubs participating in the maiden edition of the tournament. Clubs of four(4) could not hold the good news from the tournament than to join the following year as they made up with ten(10) teams.

Is an undisputable fact, that Zida Juvenile and Women's Tournament revived and resurrected women's teams in the Region.It's dumbfounding, how the tournament keeps welcoming new clubs year after year.