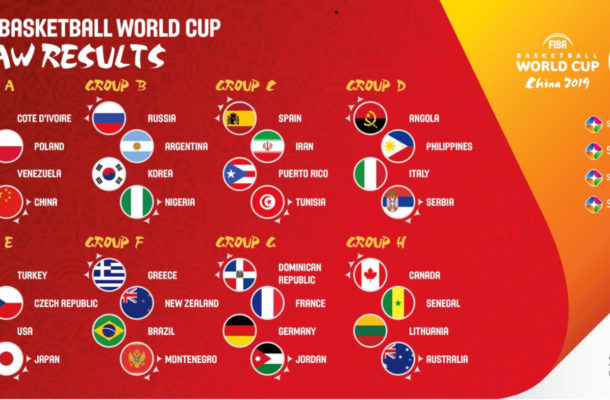 The five-time NBA champion and two-time Olympic gold medalist, Kobe Bryant, stole the show during the draw attended by top basketball officials around the world as well as eight-time NBA All-Star Yao Ming.

This 2019 edition will see the group stage expand from 24 to 32 national teams distributed into eight groups.

The host China was placed in Group A with Venezuela, Poland and Cote d'Ivoire. In Group B, Africa’s leader and world number 33, Nigeria, will face the South America leader Argentina as well as Russia and Korea.

Senegal drew one of the toughest groups on paper with Australia, Lithuania and Canada. Angola will have to be at its best against World number 4 Serbia, Italy and Philippines in Group D.

The United States, the defending champion, will begin with matchups against Turkey, the Czech Republic and Japan in Group E.

More than 8,000 spectators watched the draw at the Shenzhen Bay Arena.

The 2019 FIBA Basketball World Cup will be hosted in China's eight cities from 31 August to 15 September. StarTimes will broadcast exclusively the World Cup live across Sub-Saharan Africa.