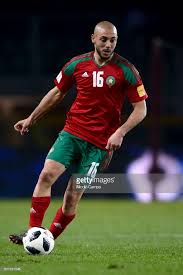 FIFA and medical experts have questioned Morocco’s decision to play Nordin Amrabat against Portugal on Wednesday only five days after he suffered a concussion.

Football’s governing body has written the Moroccan team’s doctor to remind him of its protocols.

FIFA’s guidelines suggest a minimum of six days between a concussion and returning to play but they do not have the authority to enforce this. The final decision rests with the team doctors.

“Four years on from the debacle of the last World Cup, where several players did not receive adequate care," the footballers' group said in a statement. "Football has not made sufficient progress in concussion management. Repeated calls to implement world-class safety standards have been overlooked.

“This is yet another alarming example of a player being put in harm’s way,” the player’s union added. “Amrabat returned to action too soon according to medical guidelines. Four years on from the debacle of the last World Cup, where several players did not receive adequate care, football has not made sufficient progress in concussion management. Repeated calls to implement world-class safety standards have been overlooked.”

Amrabat was taken off in Morocco’s opening Group B defeat against Iran last Friday after a clash of heads, in which he suffered memory loss and had to spend the night in hospital. “Until I woke up in the hospital, I think five, six hours totally gone,” the Watford winger said. “It’s a bit scary.”

After the player was hospitalized, the Moroccan federation said Amrabat would need at least a week off, as the ‘return to play’ protocol for concussions requires.

But to the surprise of many, the 31-year-old Amrabat started the game against Portugal wearing a head-protective cap that he took off after 15 minutes of play.

Amrabat played against Portugal for 90 minutes, and Morocco manager’s Hervé Renard described him as a “warrior”.