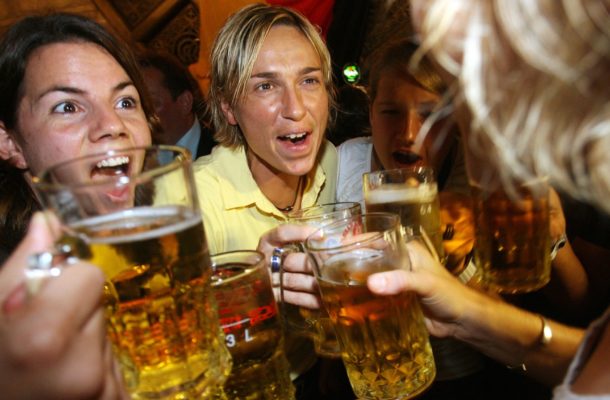 That was the vow made by Nadine Angerer immediately after the 2007 FIFA Women’s World Cup final. It was a promise that, as this image shows, Germany’s players lived up to in style.

The newly crowned world champions had every right to raise a glass or two to their own success. They had, after all, just made history by becoming the first and, to date, only team to retain the Women’s World Cup. Just as impressively, they had emerged from the finals in China having not conceded a single goal, and with 21 having flown past their opponents.

"That record will take some beating," Angerer reflected afterwards. And so far at least, no-one has come close to doing so. It could all have ended differently, though, had Angerer not saved a 64th-minute penalty from Marta – China 2007’s outstanding player and the talisman of first-time finalists Brazil.


"As a goalie, you have to set an example," said Angerer, "and when I saved the penalty, it was like me saying 'Come on you lot, shake it up a bit! What I was lucky enough to experience today was the sporting highlight of my life so far.”

That save proved to be a turning point in a match that Germany went on to win 2-0. With the trophy retained and records rewritten, all that was left was to celebrate. And as the beer flowed, this historic win was toasted with some gusto.

Did you know? Germany coach Silvia Neid kept a lucky charm with her throughout China 2007: a cuddly toy that is now on display in the FIFA World Football Museum's Women’s World Cup showcase.

When Silvia Neid led Germany to victory at the 2007 FIFA Women's World Cup it took skill, dedication, and just a little bit of luck - in the form of this miniture mascot ?⚽️ . The lucky charm was with Neid all through the tournament, and today it is a part of history in our 2007 showcase ??? . @dfb_frauenteam #Football #WomensFootball #FIFAWWC #Germany #GoodLuckCharm #Champions #DFBFrauen #Soccer