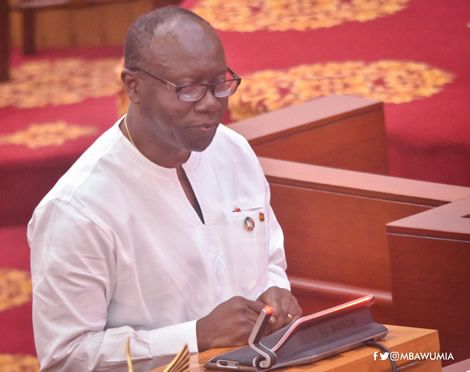 The Minister of Finance, Ken Ofori-Atta, has reiterated government’s resolve to revamp all sectors of the economy to move Ghana beyond foreign aid.

President Nana Addo Dankwa Akufo-Addo’s New Patriotic Party (NPP) has time without number, reiterated its commitment to build a robust economy which will not be dependent on foreign aids as has been the norm in the past.

Speaking at the 3rd Aliu Mahama Memorial Lecture at the National Theatre in Accra under the theme, ‘Ghana Beyond Aid, How We Get There,’ the finance minister said the variables for transforming the economy beyond aid are many, but emphasis would be laid on six revenue generating sectors of the economy.

These, he said, include agriculture, banking, oil and gas, bauxite, education, skills training as well as entrepreneurship.

Touching on the agricultural sector, Mr. Ofori-Atta told the audience that Ghana has enough arable land to feed the whole of West Africa and still have surplus food for export.

In this regard, he said government had so far done “so pretty simple but meaningful interventions” by reinvesting in the employment of agric extension workers and increasing stock and interest in farming through the “Planting for Food and Jobs” policy.

He said from next year, much of the ‘One Village, One Dam’ and ‘One District, One Factory policies would be agro-based to increase food production in the country

Mr. Ofori-Atta pointed out that for Ghana to take greater control of her economic destiny, there has to be a robust financial sector capable of financing the economic transformation.

He lamented how no Ghanaian bank was involved in the $3.1 billion syndicated loan raised in the country in the past two years – 2016/2017 and 2017/2018 crop seasons – under John Dramani Mahama’s National Democratic Congress (NDC) administration.

He said it’s time to take deliberate steps to build the capacity of “our local banks to become major participants in this assured multibillion dollar money market right here in Ghana. But, if that is to happen, our banking sector needs to grow up, both literally and metaphorically.”

He said the ministry of finance is working with the Bank of Ghana and other stakeholders in stabilising and strengthening the financial services sector through the establishment of a national development bank that is strong enough to mobilise private capital towards agricultural and industrial transformation.

“Over the next five years our intention is to grow a multibillion dollar international financial services centre in Ghana, making our country the preferred headquarters for all international banks operating in the region,” he added.

Mr Ken Ofori-Atta said the strategy of the Akufo-Addo government is to focus on leveraging the nation’s basic sources of comparative advantage, relatively inexpensive and versatile labour force and natural resources from agriculture and mining, especially the emerging oil/gas sector, to develop a value-added industrial sector that is globally competitive.

“We are keen on local content, but more importantly, we are keen on not just the profit-sharing kind but one that seeks to industrialise Ghana,” he insisted.

He told the audience that the Nana Addo-led NPP is committed to establishing a fully integrated aluminium industry with the adjoining downstream aluminium enterprises such as fabrication, rolling and extrusion.

According to the finance minister, the government is determined to enable maximum value extraction from this primary resource which can generate “anything from $2 billion to $10 billion annually to the economy for the next 50 to 70 years, depending on how far down the value chain we commit to go.”

He underscored, “President Akufo-Addo is committed to breaking the colonial chain of exporting such a rich natural resource to see to it that much of the value stays here to help us also build our country.”

Mr. Ofori-Atta pointed out that it is not possible to nurture entrepreneurial skills, advance technological innovation and take advantage of technology transfer and adoption without inclusive access to education.

This, he said, is behind government’s initiative to introduce the Free Senior High School (Free SHS) programme because “nations develop within environments with competent and skilled human resource base.”

Touching on the way forward for the country developing beyond foreign aid, the finance minister noted that over the years government revenue has not been at par with its expenditure, and successive governments have always plugged the gap either through domestic borrowing or bilateral aid from donors.

“But with the country’s current lower middle-income status, donor aid is shrinking and should soon belong to the past. ‘Ghana Beyond Aid’ calls for a rethink of our trajectory, our systems and our aspirations. Ghana is a beacon to countries across Africa. We led the way to independence, and it is our moral duty to continue being a positive role model,” he reiterated.

He however, pointed out that ‘Ghana Beyond Aid’ “does not mean we are turning our back on assistance from external development partners. Not at all. After all, the majority of EU countries depend on the EU for support. We will continue to welcome development assistance. But aid has to be firmly in line with economic and social priorities set by Ghana.”