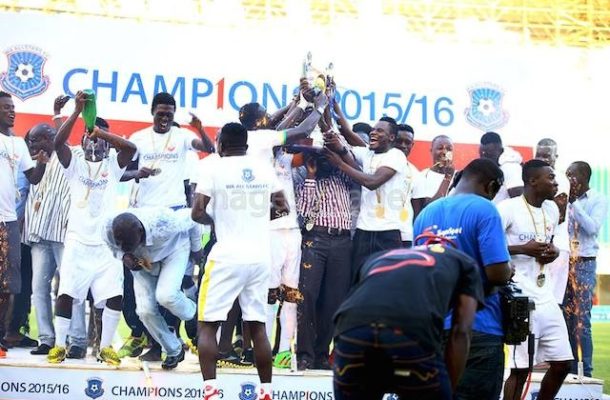 There’s no point in trying to measure the significance of Wa All Stars Ghana Premier League title,telling the story, No one thought Wa All Stars could survive even in the top four clubs,never mind challenge for a top-half finish.

And yet here we are,they have been the best team over the 30 games that have mattered this season; They have taken the GhPL,seized up and won the maiden trophy.

Ghanaguardian.com writer, Anwar Sadat Apusi brings you how the Northern Blues shocked the football fans and all the 15 other clubs.

if you were to sit down and attempt to put together a strategy for winning the league,it will presumably begin well before the season.
Wa All- Stars enjoyed a good preseason, when the team travelled to Saudi Arabia for a two-week training camp.
2. The Coach

The master stroke of the preparation will only come to fruition if the coach get his required players for the season.And if I was to jot down the requirement for a tittle-winning coach,it's unlikely you would come up with Enos Adepa's inexperience CV. Wa All Stars didn't appoint Adepa to win league,they were trying to find someone to build on the previous season's excellent late run form and take the next step towards establishing the club in the top four after Jimmy Cobina exist.

3. Disarray At The Top

Wa All Stars road to the Ghana Premier League title was paved by the expensive failures of recent champions. AshantiGold , Kumasi Asante Kotoko and Accra Hearts of Oak all need intensive squad overhauls and all had new coaches in the mid-season,with Defending champions Ashgold letting their coach go on sabbatical leave till the end of the season, but it seems almost a foregone conclusion. Aduana couldn’t muster a sustained challenge, and Medeama placed 4th on the League log.

All Stars secured the title when they defeated Aduana Stars in the last but one game that decided the leg at the Malik Jabir sports stadium Wa, as Hearts dropped points against Meadeama at the nation's Wembley, the 2-1 win clinched the title for the Northern blues.

If modern soccer is dominated by teams that dictate the pace of the game, Wa All Stars role is no disrupt to it. With a 4-4-3 that sometimes looks like a 4-5-1 or a 4-4-2 or even a 5-3-2,the Northern blues absorb pressure and then counterpunch better than any other GhPL club this season.

The key is a balance of strength and speed throughout the lineup. All stars boasts two of the most physically imposing centerbacks in the GhPL.

Call it luck. Call it preparation. Call it destiny. Whatever the case, everything went right for Wa All Stars since the start of GhPL . The club’s good health allowed Enos Adepa to maintain his lineups, led to positive morale, which meant the talent thrived, ultimately won the Ghana Premier League Title.

Wa All Stars champions of Ghana. What a time to be alive to see this Historical event with the trophy moving to the North for the first time.