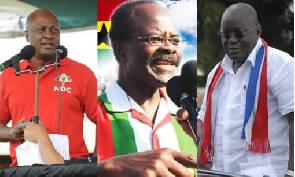 Persons seeking to become Ghana’s president are to pay a whooping GHC50,000 as nomination fee to be able to contest in this year’s presidential elections, which takes place on December 7, 3News can report.

The figure is 500 per cent from the GHC10,000 paid by presidential candidates in the 2012 elections.

Parliamentary candidates are also to pay 10,000 as against the GH¢1,000 paid in the last elections. The new figure is a 1,000 per cent increment from the previous amount.

Both presidential and parliamentary candidates are to pick their nomination forms from the Electoral Commission on Tuesday, September 13 and submit same between September 29 and 30, 2016.
 
3News sources within the ongoing Inter Party Advisory Committee [IPAC] at the Electoral Commission’s office in Accra Thursday say the smaller parties led by leader of the Democratic People’s Party, Thomas Ward Brew and the United Front Party are objecting to the amount as being astronomical.

Representatives of the Great Consolidated Popular Party have stormed out of the meeting to register their disapproval of the amount. The parties say they will petition the EC over the matter.