Only Flagstaff House is immune to recession in Ghana - Bawumia 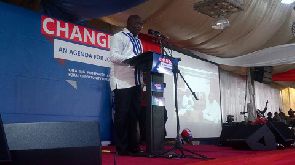 There is real economic crisis everywhere and President John Mahama should get out of the comfort of the Flagstaff House to feel what Ghanaians are suffering, vice-presidential nominee of the main opposition New Patriotic Party (NPP), Dr Mahamudu Bawumia has said.

“The IMF in its review of the Ghanaian economy has warned that Ghana is on the cusp of a financial and economic crisis. Notwithstanding this abysmal record, President John Mahama is actually asking Ghanaians where the economic crisis is. He is clearly out of touch. Mr President, the economic crisis is everywhere if you care to look outside the Flagstaff House … “ Dr Bawumia told party supporters at the International Trade Fair Centre in Accra during the launch of the party’s 2016 manifesto on Sunday, 9 October.

“Ghana is definitely facing economic crisis as a result of mismanagement, incompetence, and corruption,” the former Deputy Governor of the Bank of Ghana said.

President Mahama recently said the lenses of Nana Akufo-Addo, flag bearer of the main opposition New Patriotic Party (NPP), see economic crisis where none exists. In an address at the University of Energy and Natural Resources on day-four of his campaign tour, Mr Mahama wondered why Mr Akufo-Addo will keep harping on the "propaganda" that Ghana's economy is in "crisis" when all evidence, in his view, point to the contrary.

"… So when somebody sits and says: 'The economy is in crisis', you fail to understand where he is seeing the crisis. He probably has some lens that sees crisis where crisis does not exist and the international community is recognising it," he said.

According to Mr Mahama, the recent upgrading of Ghana's economic outlook by Moody's and the over-subscription of the last Eurobond, defeat the claims by the NPP that Ghana's economy is in crisis.

"The last Eurobond that we floated – and incidentally that Eurobond was floated to settle the outstanding Eurobond that was taken in 2007, and, so, this Eurobond was to settle the $400million left of that Eurobond. It was successful, it was oversubscribed. We went in looking for $750million; the international credit community offered us $4billion. Why would you give a country in crisis $4billion? And so it gives a lie to the propaganda people try to put out that this country is in crisis.

"Recently, Moody's which is one of the recognised international credit agencies upgraded Ghana. At the time Moody's was downgrading us in 2012, 2013, the same people said: 'Oh you see, Ghana has been downgraded, it means the economy is bad, your credit rating is poor.

"And we have fought to try and restore that confidence in Ghana's economy. So, the same Moody's that was downgrading us, you recongised it and you were happy about it. I don't know how you can be happy about your country being downgraded? I mean don't you have a sense of patriotism? But they were happy when we were downgraded. Now the same Moody's upgrades us and an opposition leader says Moody's doesn't know what they are talking about. I mean how can you eat your cake and have it? You can't have double standards in measurements.

"These are the recognised credit rating agencies: Moody's, Fitch [and] Standard & Poor's. They are the ones who rate America, China and everybody, and, so, if they say Ghana's economy has been upgraded in terms of confidence from negative to stable, then it is a good thing and so we will continue to manage the economy in a prudent manner in order that we are able to make Ghana a place of prosperity".

Dr Bawumia, however, said Mr Mahama and the NDC are misinterpreting the recent rating by Moody’s either out of ignorance or deliberately for propaganda purposes.

According to him, nothing has changed except the revised outlook. He said, in fact, international rating agencies like Moody’s, Fitch and Standard & Poor’s now have basically the same credit rating for Ghana.

“The recent revision of Ghana’s outlook from B- negative to B- stable; that is the equivalent of B3” with the revision of the outlook from negative to stable, “has resulted in a misinterpretation by this NDC government and President Mahama that Ghana’s credit rating has been upgraded.”

“This is in fact not the case. Moody’s did not upgrade Ghana. Ghana’s rating under Moody’s is still B-. It is only the outlook that has been revised and that is not equivalent to a change in rating or a rating upgrade.

“Sometimes one wonders whether they don’t read or they don’t understand. So, let me give Mr President a free piece of advice: ‘Mr President, please desist from embarrassing yourself by stating that Moody’s has upgraded Ghana.’ Your economic management team should explain that difference to you.

“The Mo Ibrahim 2016 report on governance shows that on virtually all key development indicators such as safety, rule of law, human rights, economic opportunities, infrastructure, business environment, human development, health and public management, Ghana is worse off today than it was 10 years ago,” Dr Bawumia said.

His comments were in response to Mr Mahama’s recent assertion that the recent upgrade of Ghana’s economic outlook from “negative” to “stable” by Moody’s is proof that “we’re doing something right”.

Upon his return to Accra Wednesday night after his trip to France, Mr Mahama told journalists at the Kotoka International Airport that: “In my absence we were pleased to hear that Moody’s credit rating agency has upgraded Ghana. It shows that we are doing something right and we are pleased about the way things are happening. Let us continue to work together as one nation, let’s believe in ourselves, and I believe that more than the sky is the limit.

“Our country is respected in the international community and everybody recognises that. Ghana is rising, Ghana is doing well.”