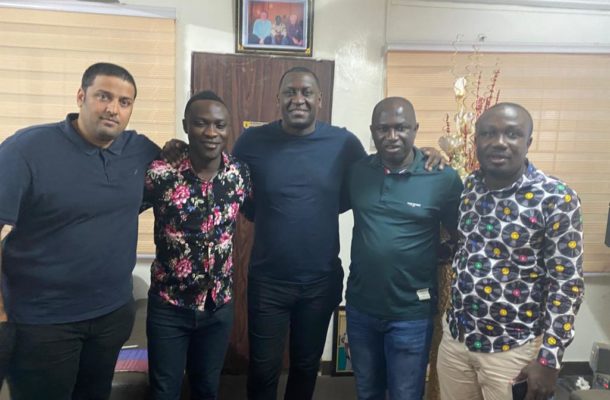 Former Liverpool and England star Emile Hesky has paid a courtesy call on Ghana Premier League side Medeama Sporting Club at the club's base in Tarkwa.

The striker who normally frequents the country visited Tarkwa on a working visit and held talks with the President of the Club Mr Moses Armah Parker but it remains unclear exactly what was discussed.

He was taking round the club's secretariat and also paid a visit to the team's adopted home venue of the Akoon Community Park.

Three years ago, the former England striker also visited Bechem United at their club's office in Accra where he was presented with a plaque by the club's President Kingsley Owusu Achiaw.

The striker represented England  more than 10 years, making 62 appearances in which he scored just seven goals.

His finest hour in an England shirt was when he scored in the 5-1 mauling of Germany in Munich.

Emile William Ivanhoe Heskey (born 11 January 1978) is an English professional footballer who last played as a striker for Championship club Bolton Wanderers. Before joining the club, he made more than 500 appearances in the Football League and Premier League over an 18-year career, and represented England in international football. He also had a spell in Australia, playing for the A-League club Newcastle Jets.

Born in Leicester, Heskey started his career with Leicester City after progressing through their youth system, making his first-team debut in 1995.

After winning the League Cup in 1997 and 2000 he made an £11 million move to Liverpool in 2000, which, at the time, was the record transfer fee paid by the club. At Liverpool, he won multiple honours, including the FA Cup in 2001. He moved to Birmingham City in 2004 and after their relegation from the Premier League signed for Wigan Athletic for a club record £5.5 million fee in 2006.

He signed for Aston Villa in 2009 and was released in 2012 before signing for Australian side Newcastle Jets. After two years, he returned to England, signing for Championship club Bolton Wanderers.

Heskey was an England international at under-16, under-18, under-21, B and senior levels.

He made his England debut against Hungary in a 1–1 draw in 1999. He lost his place in the squad after UEFA Euro 2004, during which he failed to shine and was the subject of much criticism.

After a long lay-off from international duty, Heskey was recalled to the England squad for UEFA Euro 2008 qualifiers in September 2007.

He retired from international football following the 2010 FIFA World Cup, having attained 62 caps and scored 7 goals for his country.