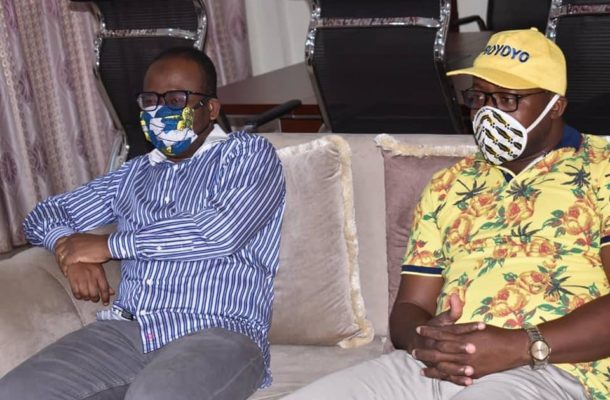 Embattled former Ghana Football Association(GFA) President, Kwesi Nyantakyi has been sighted in public after a long while.

The former GFA boss on Friday paid a visit to his native Wa where he paid a courtesy call on the Upper West Regional Minister, Dr. Hafix Bin Salih.

Kwesi Nyantakyi since the Anas Aremeyeaw Anas expose which ousted him from the GFA boss position has barely been seen in public.

The former President of Wa All Stars held an in camera meeting with the minister on issues of personal interest.

The Regional Minister is thought to have close affinity with the beleaguered Kwesi Nyantakyi who hails from Wa.

"Kwesi Nyantakyi, former GFA President was in my office for a discussion. I used the opportunity to wish him well in his trying time of his life. Allah is sufficient to his servant," Dr Hafiz Bin Salih posted on his social media handle.

Nyantakyi was GFA boss from 2005 until 2018 and rose to become a CAF 1st vice-president and a FIFA Executive Council member until the number 12 documentary by investigative journalist Anas Aremeyaw indicted him on charges of corruption.