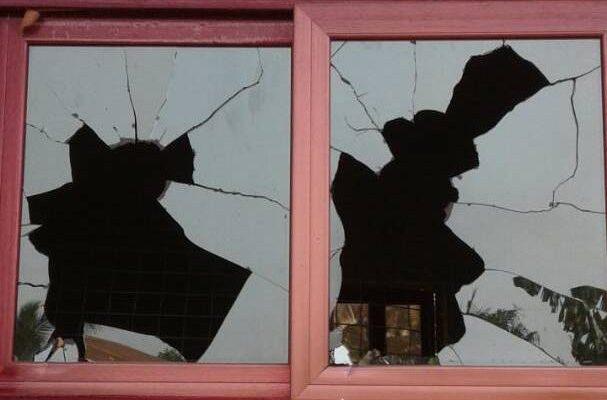 Former Brong Ahafo regional Minister and current Member of Parliament for Asunafo South constituency, Eric Opoku had a bitter Christmas Day celebrations when his home was attacked during a Christmas Party.

The MP who was having a Christmas Day party for his constituents at his residence was attacked by seven unknown gunmen who were armed with locally manufactured pistols and machetes.

The incident which was reported to have occurred at around 9am sent the whole party into a frenzy when the armed men forcefully accessed the main gate of the house to disrupt the gathering.

They reportedly broke the glass windows and doors of the house, vandalised several of the vehicles that had been parked on the property and other things they could lay their hands on.

“We managed to bolt into the MPs house and thankfully everyone was safe indoors. They pelted stones at the vehicles and smashed some while destroying his sliding doors and windows too. They were young men between ages 24-35 years,” an eyewitness reported

Meanwhile, the Director of Elections of the National Democratic Congress (NDC) in the Constituency, Prince Nyarko has alleged that members of the governing New Patriotic Party (NPP) were behind the attack.

The police and officials of the Bureau of National Investigations (BNI) have visited the scene to start investigation into the case.