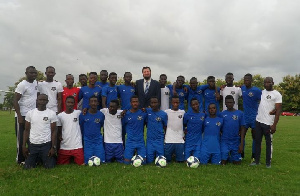 Again, the academy will train young talents between the ages of 12 to 17 years the basic development and professional technics to fulfill their dreams of becoming football superstars.

Speaking at the commissioning, the Former President of F.C Frankfurt Academy, Mr. Wahid Bensaou said Ghana is bound with so many football talents that need to develop their skills to become the best.

He said the Tamale F.C Frankfurt City football academy goal is to blend both the European mentality and African talents together, saying that, almost European football clubs have Ghanaians players especially talents from Tamale.

“There are so many talents in Tamale, It is well-known in Europe that there are talents in Tamale, so we open this academy in Tamale to give these young talents the technical, physical and mental support, we wants to grow both the European mentality and African talents together”. He said

The Manager of the newly established Tamale F.C. Frankfurt City academy, Mr. Ibrahim Sunday, a former Hearts of Oak player and the son of Ghanaian football legend George Alhassan reiterated that, the North of Ghana is bound with very good football talents.

“There is so much talent in Northern Ghana, so we decided to come to open an academy here, which we have in Frankfurt, Germany… so we will be able to prepare the young players about the modern standard of football, we have realize that there are lots talent in Tamale but the problem is that, tactical they are poor, they have the talent but lacks the tactical discipline in football”. He said

“So our intention is that we combine the tactical aspect of it together with the talent that they have today, now you realise that without tactics they cannot go anywhere …so our intention is to build a strong academy here in Tamale to take them internationally, prepare them mentally and physically fit to able to compete not only national but the international level”. He said

The former Hearts of Oak player said, over 40 young players came out during the justify-for-inclusion but over 20 young players were selected to start the academy, adding that, the academy will also scout to get more talents on board.

The son of the Ghanaian football legend who is also an intentional coach of a repute believed that professional footballers can create greater impact for societal aspirations and development especially in the North of Ghana where there is so much poverty among many households.

“These young football talents can make the difference tomorrow, they can bring about development and they can alleviate or break the shackles of poverty among their families. But we have to prepare them well enough to able to create this change”. Coach Sunday emphasized

Coach Sunday said, the academy will provide the necessary training both mentally and physically to realize their full potentials.

He hinted that, the academy will be looking out for partnerships and sponsors around the globe to grow the many football talents in the North of Ghana.