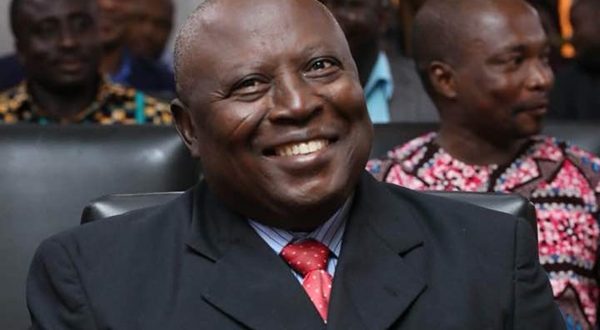 Richard Nyamah, the spokesperson for acting National Chairman of the governing New Patriotic Party (NPP), Freddy Blay, says his boss is ready to subject himself to investigations by the special prosecutor, Martin Amidu.

This follows Mr. Blay’s personal procurement of 275 buses for all NPP constituency offices across the country, ahead of the party’s national delegates congress on Saturday, where he is contesting to become the substantive Chairman.

It emerged on Thursday that Martin Amidu was investigating Mr. Blay over the action which many say warrants a probe.

Mr. Blay has been widely criticized after he took delivery of the first batch of 100 minibuses at the Port on Wednesday, barely three days to the party’s national delegate’s congress in Koforidua.

Blay facilitated the purchase of the minibuses, and reportedly made a down payment of $3 million, which constitutes 30% of the total cost of 11.4 million dollars for the 275 cars.

Richard Nyamah in a Citi News interview said Freddie Blay is ready to assist the special prosecutor to conduct an investigation into this action, as they are confident they did nothing wrong.

“If the special prosecutor is minded to know the details, they should search for the contract document, read it, be sure of what they want and if they are not satisfied, they can invite us, and we will gladly make an appearance,” he said.

Mr. Freddie Blay’s close contender in the NPP chairmanship race, Stephen Ntim, has accused him of seeking to buy votes with the gesture, whereas others have questioned the source of the money, alleging possible corruption.

A source at the Office of the Special Prosecutor told Citi News that Mr. Amidu will go ahead with the investigations whether or not Mr. Blay wins this Saturday’s election.

The source said Mr. Martin Amidu is of the view that, Mr. Blay is a public officer as a Board Chairman of the Ghana National Petroleum Corporation (GNPC), and also as a national officer of the governing party with influence, he falls under the Criminal offenses Act (1960) Act 29, and must therefore be questioned on his source of funding.

“He has gone into an agreement with a bank, where the bank will make a profit and the constituencies at the end of every month, would also get some payments in their accounts to pay the party at the constituency level.”

The buses will also remain under the name of UMB, “until the facility is fully paid,” he added.

“When the facility is paid off, the buses will be owned by the constituencies and ownership transferred to them.”

The Spokesperson also stressed on Eyewitness News that discussions were held with the NPP and that the party “agreed and okayed the deal.”

“In the event that there is anything wrong; any loses, Mr. Blay will bear the brunt of it. So if you are asking whose head is on the chopping block, it is Mr. Blay’s head,” the spokesperson said.