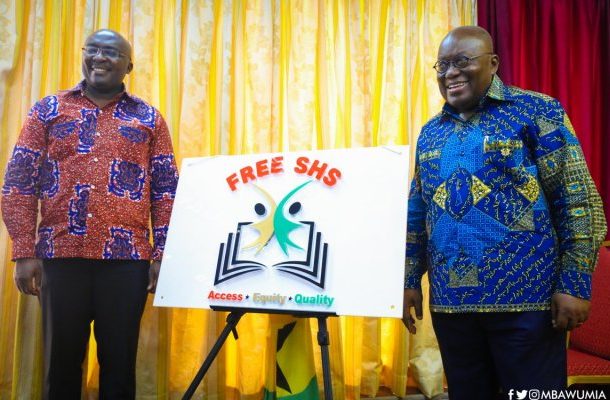 The former Rector of the Ghana Institute of Management and Public Administration (GIMPA), Professor Stephen Adei, has observed that the Free Senior High School (SHS) programme implemented by the governing New Patriotic Party (NPP) has the potential to be the best policy introduced by President Nana Akufo-Addo.The former lecturer at Ashesi University lauded some aspects of the Free SHS programme but was quick to add that the quality of education, especially in basic schools, needs an overhaul in order to make the Free SHS a “game changer”.Speaking in an interview on Class9FM on Wednesday, 17 July 2019, Prof Adei stated: “For me, if Akufo-Addo doesn’t achieve anything, that would have been his best achievement provided, and I’m hoping within the next few years the complement, the quality [will be improved], especially at the basic school. If it is not done, then all this is going down the drain but once we improve the quality of basic education, this free secondary school will be a game changer,” he stated.Prof Adei is known to have stated his disagreement with the blanket implementation of the policy to cover all students as he would have wished the programme was targeted at the poor.On Tuesday, 24 July 2018, Prof Adei said on Class9FM that: “The only thing is that it is difficult to assess the income of people in Ghana, apart from those in formal employment.“It makes sense but it is not going to be easy to implement such a suggestion. If you are not careful, you will find out that a few higher income-earning people [on] whose salary, taxes have been increased, are going to be the same persons who will fall into that bracket.“It is a dicey issue; I don’t see why a billionaire should be having their children go to school for free.”The Chairman of the National Development Planning Commission (NDPC) is looking forward to the country assessing the impact of Free SHS on the economy.The Free SHS policy is a government of Ghana initiative introduced by Akufo-Addo’s administration in September 2017.The policy had been a major campaign policy prior to the election of President Akufo-Addo in 2016.