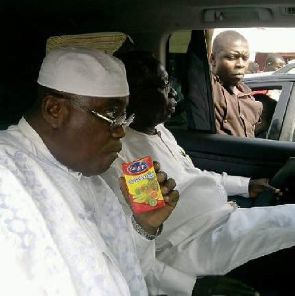 An attempt by Ghana's ruling party(NDC), to make fun of the main opposition candidate in the presidential election by posting a photograph of him sipping from a small carton of Kalyppo fruit juice has backfired, with his supporters adopting the brand to rally support.

The new craze for Kalyppo juice, a locally-produced drink marketed mainly for children, is giving Nana Akufo-Addo of the New Patriotic Party the sort of free publicity politicians crave.

As Akufo-Addo's convoy weaved through a densely-packed neighourhood of the capital last week, his supporters waved the boxes aloft and sipped the juice through straws.

One woman pinned Kalyppo to a selfie-stick. On Facebook and Twitter supporters pictured themselves drinking Kalyppo and even pretending to shower and fuel their cars with it.

The trend began when supporters of the ruling New Democratic Congress posted a photograph of Akufo-Addo drinking Kalyppo as a refreshment between campaign stops.

It was intended to gently mock Akufo-Addo, perhaps by making him look undignified, but NPP officials said they then adopted the drink as a sign of solidarity, in part to boost Akufo-Addo's credentials as a man of the people.

One campaign aide said the party welcomed the boost ahead of the Dec. 7 vote, when Akufo-Addo faces President John Mahama, who is running for a second and final four-year term. The opposition leader has lost two previous presidential races.

Kalyppo is made by Aquafresh Limited which is based in Accra, according to its website. No one at the company was available to comment but the secretary general of the Ghana Federation of Labour, which represents Aquafresh workers, cautioned that the craze was not necessarily a good thing.

"Once the consumers are polarised (along party lines) ... the regular sales would be negatively affected to the detriment of the employees," he told Reuters.

Ghana is one of Africa's most stable democracies and twice since 2000 voters have turfed the government out of power. Growth has slowed since Mahama took power, in part because of lower global prices for the country's commodity exports.