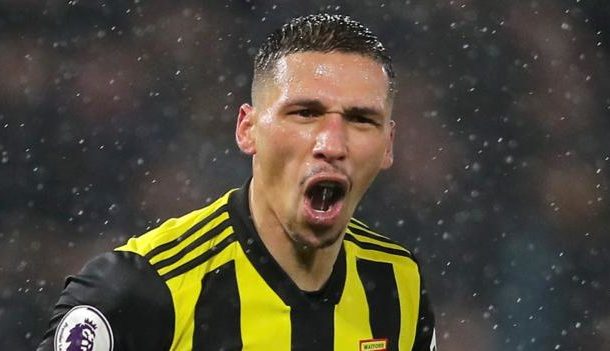 Liverpool finally found their range to defeat Manchester United and regain their place at the top of the Premier League after Manchester City's win over Everton.
Elsewhere, bottom side Fulham were beaten at home by West Ham, while Southampton ended Arsenal's 22-match unbeaten run.
But which players earned a spot in my team of the week?

Every team needs a little bit of luck now and again, and Crystal Palace rode theirs against Leicester.
Making his Premier League debut, in atrocious conditions, Guaita played a key role in helping Palace to a well-earned and a very deserved three points.
It was Guaita's save from the predatory Jamie Vardy that saved their day. To see Guaita's save from the England international come off the post and back into his hands is about as good as it gets in terms of luck.
Nevertheless, the original save was top class.
Did you know? Guaita made two saves in Palace's win over Leicester, and became the first Eagles goalkeeper to keep a clean sheet in his first Premier League match.
Defenders - Jamaal Lascelles (Newcastle), Virgil van Dijk (Liverpool), Jose Holebas (Watford)

Jamaal Lascelles: Lascelles was very lucky to have finished the game against Huddersfield. Referee Anthony Taylor thought his tackle on Laurent Depoitre was nothing more than a bookable offence. I must say I wasn't sure but what I do know is that everything the defender did thereafter was commandingly brilliant.
Did you know? Lascelles made nine clearances, two interceptions and one block to help preserve Newcastle's 1-0 victory over Huddersfield Town.
Virgil van Dijk: The big Dutchman could play football in a cardigan and carpet slippers while smoking a pipe.
I don't think I've ever seen a Liverpool defender look so comfortable at the back in a match against Manchester United. Virgil van Dijk is looking supreme these days and this victory for Liverpool never looked in doubt.
As for United, they can't afford to leave a fit Paul Pogba out of the side. They don't have enough quality in midfield to do that. Read more about what I think about the Mourinho's relationship with Pogba in Crooks of the Matter below.
Did you know? Van Dijk won 75% of his duels against United, as well as regaining possession five times for the Reds - a tally only Andy Robertson (seven) bettered among Liverpool defenders.
Jose Holebas: There are not many left-backs that curl a ball, first time, past a goalkeeper who is having an outstanding game, from 25 yards.
Well, Jose Holebas did and it was a magnificent finish. The Greece international is as comfortable on the ball as I have seen for a defender and he has done this sort of thing before.
Did you know? Holebas has been directly involved in more Premier League goals than any other defender this season (3 goals, 4 assists).
Midfielders - Gerard Deulofeu (Watford), Luka Milivojevic (Crystal Palace), Henrikh Mkhitaryan (Arsenal), Eden Hazard (Chelsea)

Gerard Deulofeu: I've seen him score superb goals for Everton, and you don't play for Barcelona unless you are a gifted individual. Gerard Deulofeu is a very talented player indeed. The problem is you have to wait ages to see the occasional flash of genius from the Spain international, but when that inspiration emerges it's always memorable. His goal against Cardiff was Maradona-esque, and if this player could become a consistent performer instead of just a talented one, he'd be sensational.
He would also be playing for Barcelona and not Watford.
Did you know? Deulofeu scored and assisted in the same Premier League game for the first time with Watford, last doing so in November 2015 for Everton against Sunderland.
Luka Milivojevic: When Wilfried Zaha is not on the teamsheet, hearts must sink at Crystal Palace. Not only is he a lovely player to watch but Palace are less likely to win without him. Fortunately Luka Milivojevic was magnificent in midfield against Leicester yet again and scored a wonderful goal to cap a superb performance. Palace do need reinforcement though.
Did you know? Since his Premier League debut in February 2017, Milivojevic has scored more goals in the competition for Palace than any other player.
Henrikh Mkhitaryan: We've seen flashes of brilliance from Henrikh Mkhitaryan when he was at Manchester United so we know he can play. However, what we are seeing at Arsenal is a player who has been made to feel he belongs at the club. His performances - not to mention his two goals against Southampton - certainly look like it.
Arsenal deserved a point from this game, and if it hadn't been for Bernd Leno in goal for the Gunners they would have done.
I'm not going to penalise Mkhitaryan for that.
Did you know? Mkhitaryan has scored as many Premier League goals for Arsenal in 25 games as he did for Manchester United in 39 (five).
Eden Hazard: Brighton v Chelsea was the Eden Hazard show. This game was virtually over after 40 minutes, after Hazard set up the opener for Pedro and then scored Chelsea's second himself.
It was always going to be tough for Brighton to come back from two goals down and so it proved.
Chelsea boss Maurizio Sarri suggests there is more to come from Hazard. I'm not sure he should be making comments like that when Real Madrid have made it clear they want the Belgian star,
Did you know? Hazard has been directly involved in more Premier League goals this season (17 in 16 games) than he was in the whole of last season (16 in 34).
Forwards - Danny Ings (Southampton), Salomon Rondon (Newcastle), Gabriel Jesus (Manchester City)

Danny Ings: The moment Danny Ings walked back into Southampton, he looked like a player with a point to prove.
The on-loan Liverpool striker may be surplus to requirements at Anfield, but if the Saints can keep Ings fit their chances of survival increase enormously.
Did you know? Ings scored two headed goals in an English league game for the first time in his career.
Salomon Rondon: This lad deserved his goal at Huddersfield for the way he persevered up front on his own for the best part of the game.
In seasons gone by, Salomon Rondon would never have lasted the 90 minutes - his fitness levels would never have allowed it.
A much fitter Rondon is not only leading the line effectively for Rafa Benitez's Newcastle, but is looking a real goal threat up front.
Benitez is performing miracles again with these players.
Did you know? Rondon has been directly involved in six of Newcastle's 14 Premier League goals so far this season (four goals, two assists).
Gabriel Jesus: I said last week that Pep Guardiola made a big mistake by not playing Gabriel Jesus against Chelsea at Stamford Bridge.
The City manager, determined not to make the same mistake twice, put the Brazil striker back in his starting line-up and with devastating effect.
Within minutes of the encounter, Jesus was causing mayhem in Everton's defensive ranks only to finish the match with two superbly taken goals and a brief return to the top of the table for his manager. Pep take note.
Did you know? Jesus managed his first Premier League double since October 2017 v Stoke City.
Now it's your turn
You've seen my picks this week. But who would you go for?
Pick your XI from our list and share with your friends.

Pick your Team of the Week

The Crooks of the matter
Rumours that Jose Mourinho wants to sell Paul Pogba in the January window, if true, are madness. His sale must not be allowed.
Leaving Pogba out of the match between Liverpool and Manchester United will serve to fuel even more speculation but such a move would be counter-productive for the club at this time and the club's board must resist it.
You should be bringing quality players to the club in January, not getting rid of the ones you've got.
Mourinho has a reputation for winning trophies but in the absence of such achievements, he is too costly and leaves clubs in bits when he departs. And he will leave.
Mourinho is not the right manager for United and the club executives know it. They have made a mistake.
It's nothing personal but Mourinho does not play the sort of football that is compatible with Manchester United's philosophy.
Quite simply, his football is dull and he's the wrong man in the wrong job, and if allowed to go unchecked, the possible sale of Pogba will be bad for business as well.Source: bbc.com