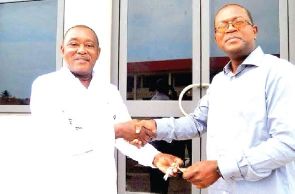 The Ghana Boxing Authority (GBA), has a new office at the Bukom Boxing Arena.

The office would serve the administrative needs of the body that controls boxing in Ghana.

The office was handed over to the GBA by the management of the facility after the local boxing controlling body had operated at the Accra Sports Stadium since its establishment.

Mr. Peter Zwennes, President of GBA, expressed appreciation to the facility managers for providing them with a secretariat, where they can run their businesses effectively.

“The management of Trust Sports Emporium graciously offered to donate the office for our purposes sometime last year and we are grateful to them.

“After the office space was given to us, we needed to complete it, by doing some outstanding works.

“Thankfully we got donation from Agriculture Development Bank and Ghana Olympic Committee, which aided us in bringing the office to in its current state, but there were still a lot more work to be done.

“So we appealing to sponsors to come to our aid, so we could apply the finishing touches to the office,” he ended.

The Sports Emporium also donated some boxing equipment to the GBA, which would be distributed among regional federations.