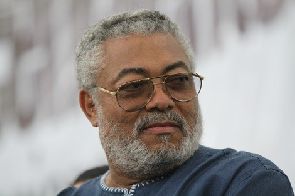 The Great Consolidated Popular Party (GCPP) has officially petitioned the Economic and Organised Crime Office (EOCO) to investigate former President Jerry John Rawlings, who has confessed to receiving $2 million from Nigeria’s Sani Abacha after years of silence on the matter.

Ex-president Rawlings admitted in an interview with Nigeria’s Guardian Newspaper that, he had received the money from Nigeria’s leader in 1998, although he denied the amount was five million dollars as alleged initially.

But just when the matter appeared to have died down, GCPP’s flagbearer, Henry Herbert Lartey, has resurrected it.

In his petition, he is asking EOCO to among others, ascertain “the full context and/or reason(s) in which the funds were issued” to Mr. Rawlings.

Below is the full petition

The Great Consolidated Popular Party is requesting a formal petition of inquiry into key dealings of former President Jerry Rawlings. The thematic areas of inquiry/complaint are the following:

The historic public record notes that in 1998 Former President Rawlings denied having received financial support from the then President of Nigeria, Sani Abacha. Today, he has publicly declared that he did in fact receive $2 million from the Nigerian President. This petition of inquiry seeks to ascertain:
The full context and/or reason(s) in which the funds were issued: In particular, were these funds issued in support of killing the prominent Nigerian environmental journalist Ken Sara-Wiwa?

The actual amount of funds issued (as there are discrepancies regarding the amount): Did he receive $2 million, $5 million, or $100 million?
What happened to the remaining £30 million loan from the initial £31.5 million that was issued by the Royal Bank of Scotland to International Generics (for which Mrs.

Rawlings was the primary benefactor through a ‘frontman’ named Leon Tamman) under the British Export Guarantee Facility for the construction of La Palm Hotel and Coco Palm Hotel? It has been reported by the former Deputy British High Commissioner in Ghana, Greg Murray, in his book entitled ‘The Catholic Orangemen of Togo and Other Conflicts I have Known’ that only £1.5 million of the funds actually went towards the development of these enterprises, while the remaining £30 million was privately looted by Mrs. Rawlings via Leon Tamman. Is this true?

How did the Former First Lady Mrs. Rawlings acquire the Nsawam Cannery in light of her financial capacities at time?

Is it true that the Rawlings hold substantive shares within the Ghana Rubber Estate Ltd.?

Is it true that the Rawlings were using transporting gold to Switzerland on a regular basis?

We trust that Former President Rawlings will answer these questions honestly since he is the Champion of probity, transparency and accountability.
The full support of EoCo is herewith called upon in this petition.