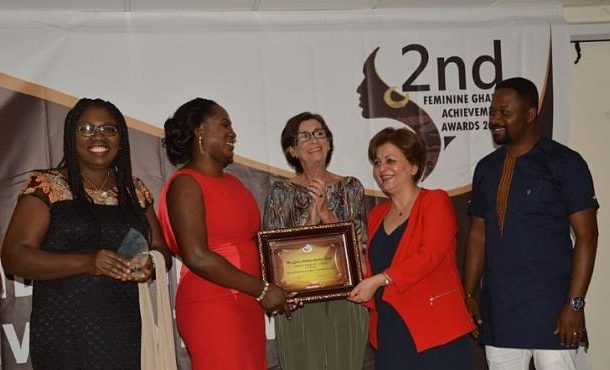 In a sector that is highly dominated by the male counterparts, only a few females are able to sail through; with yet still a handful of them matching the males shoulder to shoulder and efficiently managing affairs of reputable organizations in Ghana.

One of such capable women is Mrs. Eunice Ankomaa Apraku Antwi, the General Manager of Samara Company Limited, producers of Sasso Insecticide Spray and Mosquito Coil.

She has been adjudged the ‘Most Outstanding Executive’ in household products at the second edition of the Feminine Ghana Achievement Award ceremony held recently in Accra and organized by The Business Executive Magazine.

Mrs. Apraku Antwi’s award comes on the heel of her demonstration of self confidence, professionalism, and passion for her position as General Manager of Sasso which has contributed to the soaring brand of the company in Ghana and its being awarded the ‘Fastest Growing Company’ by government at the 2015 Head of State Award (HOSA).

Her citation reads: “As the General Manager of Samara Group, you have played a key role in the huge success of the Sasso brand of insecticide spray and mosquito coil in the Ghanaian market. Your resourcefulness, dedication and sense of responsibility have been invaluable in building one of the best known home grown Ghanaian product brands today, and this has made you a role model for rising female executives in the manufacturing sector all around the country.”

The Feminine Ghana Achievement Award seeks to identify and reward outstanding women both in the public and private sectors whose personal and professional conduct have been exemplary but whose accomplishments have not been publicly recognized – thus female entrepreneurs, professionals, corporate executives, public institutional managers, diplomats, sportswomen and female traditional rulers.

This award scheme was established to specifically recognize the accomplishment of women on the basis of their gender, and therefore stands out amongst the many generalist awards introduced in Ghana today.

Asked how she feels about the honour, the Sasso female General Manager said the award has come at a time that she least expected, however, it affirms that her services are monitored and are considered worthy of recognition.

“I’m happy about it even though I didn’t expect it. With this award I am confident that I am doing something right to have been nominated first and winning it; I’m sure they might have noticed my ability as a functional key team player,” she said.

Mrs. Apraku Antwi disclosed that she has occupied the General Manager position of Samara Company for three years; and though a very challenging post she dared herself to discharge her duties in ways that would dispel the general notion that ‘such positions are better headed by men’.

As a happy mother of two children, she was full of appreciation to her husband, Mr. Nickson Kwame Antwi, for his immense support in helping her in diverse ways to reach this achievement.

“I am happy to have achieved this feat and I believe in the saying that “what a man can do a woman can do and even better”. I thank God for making it possible and I also thank the Executive Chairman of Samara Company Limited, Dr. Sampson Effah Apraku, for having such great confident in me and giving me the opportunity to give off my best. I shall continue to ensure that Samara remains at the top in Ghana and Africa as a whole”.

“I dedicate this award to my entire team – both management and staff of Samara Company – whose hard work has played a part in this acknowledgment; and also to my husband, Mr. Nickson Kwame Antwi for his enormous support. I am more determined to balance my interpersonal and decisional role effectively for greater heights in the near future,” an elated Mrs. Antwi emphasized.

Asked what motivational message she has for colleague women in the sector and Ghanaian women as a whole, Eunice said “I want to encourage women to learn to empower each other and use their creativity ability to make their contribution in the production sector successful and to make the world a better place for everyone and also for the unborn generations. Let us guard against hatefulness and envy,” she admonished.

Mrs. Antwi holds a Masters in International Finance from Stafforshire University in the UK after pursing a degree in Marketing at the Central University in Ghana. She is determined to be the best role model to her children, Kayla Apraku Antwi and Kemuel-McCurdy Apraku Antwi.

In all twenty-five (25) professional women were acknowledged and rewarded. Some of them are the CEO of Reroy Cables; the CEO of Sidalco Limited; Deputy Managing Direcor of Prudential Bank, and CEO of Jandel Limited, just to mention a few.