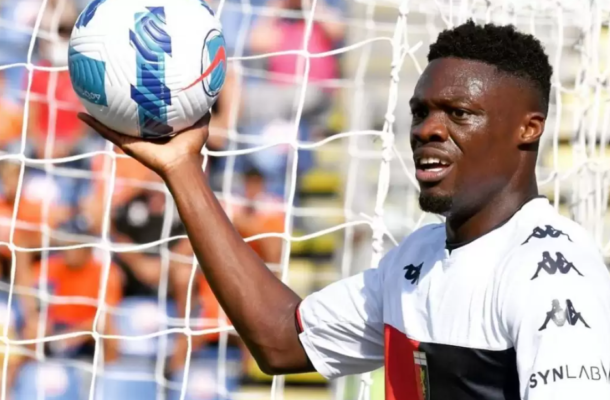 Ghanaian striker Caleb Ekuban is looking for a new club after his Italian Serie A side Genoa suffered relegation at the end of the 2021/2022 season.

The player joined Genoa in the summer of last season for 1.8 million Euros after a fine campaign for Trabzonspor but as they always say the grass is not always greener at the other side as he struggled to produce the goals at Genoa.

Besiktas manager, Valerie Ishmael has asked the club to get the giant Ghanaian striker ahead of the start of next season.

They are not alone as Konyaspor have also been linked with the striker who had three successful seasons at Trabzonspor.

During the winter transfer window a host of clubs in Turkey where after the striker but he decided to stay put in Italy in order to help his side fight relegation.

According to Sky Italia, Ekuban, who is planning to leave Genoa, after the team's relegation, is also aspired wanted by Fenerbahçe.

It Is noted that the Ghanaian star, who is keen to leave his team, has interested from Serie A side Spezia.

The 28-year-old player, who has a contract with Genoa until 2024, played in 32 games in the past season, scoring 2 goals and providing 2 assists. Ekuban's current market value is 1.8 million Euros.