German govt spent over €200,000 on my hospital bills, I would have died if I were in Ghana - Ghanaian claims 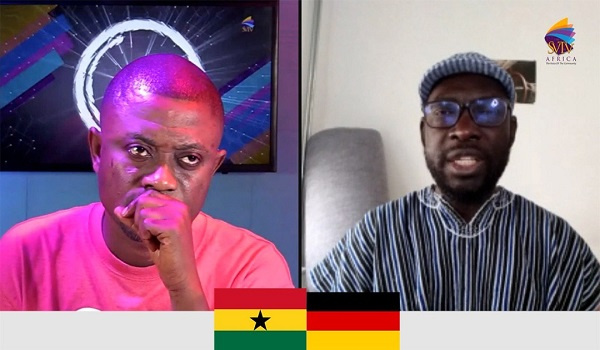 Mathew Ohene Ayim and host of the interview

A Germany-based Ghanaian, Mathew Ohene Ayim, has revealed that he only discovered he had liver cirrhosis after arriving in Germany and had several fatal operations done without paying a penny.

According to him, his hospital bills over the past four years amounted to €200,000 (Ghs1.68 million). The German doctors told him that he should have gotten the diagnosis as a kid due to the severity of the disease.

Speaking on Daily Hustle Worldwide, Mathew mentioned that the doctors warned him about the deadly nature of the medical operation. As a result, he said his goodbyes to his wife and family and prepared for the worst.

“The doctors were even surprised that I agreed to the operation. I gave my wife the hospital address and contacts in case I died. When they put me in the machine, I became sad. Not because I might die, but the equipment I saw made me wonder if I would get the same treatment if I were in Ghana,” he said.

“Even though I have not worked here, the government spends over GHs100,000 on medication monthly. Last year, a doctor told me they have spent over 200,000 euros already.”

Mr. Ayim’s visa expired before his diagnosis in the hospital, but he got an extension for his treatment before leaving the country.

“Even after the operations, I told the doctors that I wanted to visit my family, and they disagreed. They said they know how our medical system is, and the treatment would go to waste,” she told DJ Nyaami.

Cirrhosis is a late-stage liver disease in which healthy liver tissue is replaced with scar tissue, and the liver is permanently damaged. Scar tissue keeps your liver from working appropriately. According to the doctors, his liver is likely to be replaced.

The German government continues to support Mathew till he has fully recovered.