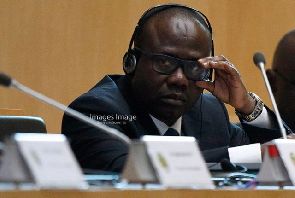 Ghana is used to busy football summers, especially in World Cup years, but nothing could have prepared the country for the subject that has gripped it this time around.

Without the Black Stars at the World Cup for the first time in more than a decade, the football conversation has shifted from endless debates over player call-ups, false hopes about becoming world champions, and player bonuses, to a much more damaging one: an undercover journalism piece that has created a leadership crisis in Ghana football, claimed its top football executive, and has brought all football activities to a halt.

The piece, When Greed and Corruption become the Norm, a two-hour documentary by investigative journalist Anas Aremeyaw Anas, showed several referees accepting bribes to make favourable decisions in the Ghana Premier League, sometimes with the collusion of appointing officials.

But its biggest talking point has been Kwesi Nyantakyi, who for 13 years was the Football Association president, and at some point a CAF vice-president and FIFA Council member.

In the video, Nyantakyi is seen packing what the undercover journalist says is $65 000 into a bag after he had discussed a proposed $5million-a-year sponsorship deal for the league. In the same video, he discusses how 20-25 percent of the same sponsorship money should be paid to a company he owns.

He has since resigned from his post as GFA president, and also quit his role as a CAF executive committee member and vice-president. He has also resigned from the FIFA Council, according to CAF boss Ahmad Ahmad.

Those resignations leave Ghana without an influential voice at the highest level of the sport on the continent and beyond, but the damage has been even more profound at home.

The Ghana FA has put all football activity on hold until further notice "as a result of a directive from the government of Ghana". The body has also vowed to "take all legitimate steps to restore confidence and trust in the beautiful game", and offered "unconditional apologies" to the country as a first step.

To restore confidence, the GFA has asked all officials -- including four members of its flagship executive committee -- to step aside, and scrapped the Referees Appointment Committees, which was one of the bodies hardest hit by the investigation.

While the statements and measures are the GFA's way of saying they have the situation under control, it seems obvious that there is little appetite in the country for the same body to undertake the reforms required.

It was already without a vice-president before Nyantekyi resigned, and it's general-secretary, Isaac Addo, has been a divisive figure after he was handed the job by Nyantekyi following the expiration of a nine-month ban by the FIFA Ethics Committee for sexual harassment charges during a workshop for the 2016 Under-20 Women's World Cup in Papua New Guinea.

The Ghana League Clubs Association, through its chairman Kudjoe Fianoo, are hoping to fill the growing leadership void.

"We want an emergency congress that will decide how best to deal with the crisis," Fianoo told KweséESPN. "We must decide on a way forward as soon as possible."

Until then the Ghana Premier League remains on hold, the fate of the Ghana FA Cup is unknown, and the future of the Women's Africa Cup of Nations, which the country is due to host in November, is uncertain.

Anas had claimed ahead of the screening of his documentary that "the very foundation of Ghana football will collapse in a heap." No-one could have imagined it would be to this extent...