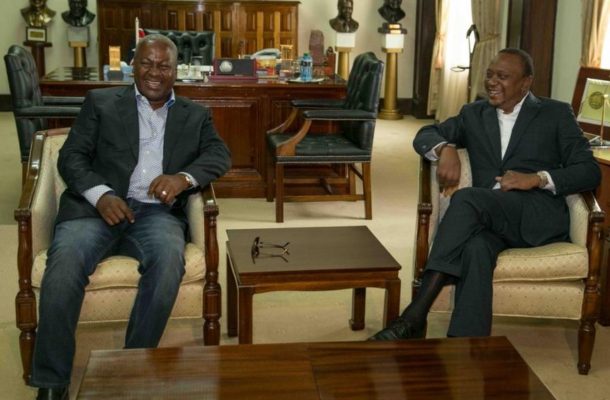 At a meeting the State House in Nairobi , they two leaders discussed ways of enriching the bonds of friendship and cooperation between the two countries to improve on the ease of doing business so as to increase overall intra-African trade.

President Mahama was among Heads of State and government ministers, United Nations agencies and more than 10,000 delegates who were in Nairobi for the 6th Tokyo International Conference on African Development ( TICAD VI ), the first on African soil.

exchanged views on the need to establish Double Taxation Agreements between the two nations, protect investments in each other’s country and how Nairobi and Accra could serve as effective sub-regional aviation hubs in East and West Africa respectively.


The two leaders sought the implementation of various agreements signed between the two nations two years ago, which include development of partnerships in Air Services and Trade, Tourism, Agriculture, Energy, Oil and Gas, Information and Communications Technologies, (ICTs), and Education.

The Ghanaian leader commended Kenya for its success in the tourism sector. President Mahama had first-hand experience of it when he visited Masai Mara game reserve on Monday.

Ties between the two countries date back to the pre-colonial days when Ghana's First President Kwame Nkrumah and Kenya's founding father President Jomo Kenyatta worked closely to defeat colonialism and were both famous Pan Africanists.