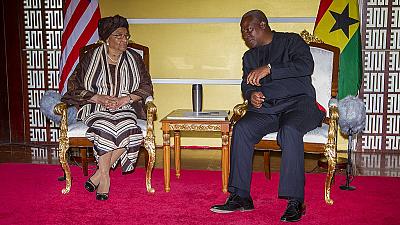 President John Dramani Mahama on Friday announced Ghana's readiness to strengthen her trade and security relations with Liberia and other neighbouring countries.

He said although the West African sub-region is engaged in some form of trade and commerce, cementing their regional integration would become the final endorsement that would strengthen the blocs and the entire continent.

President Mahama announced this at a joint news conference with Liberian President Ellen Johnson Sirleaf at the Flagstaff House, Kanda.

The Liberian President who is on a day's visit to Ghana was at the Presidency to discuss diplomatic and bilateral relations with President Mahama.

The news conference was held after the two West African leaders had held an hour-long closed door discussion.

He said the two countries also discussed cooperation in power generation and once Ghana had the comparative advantage in the commodity, efforts would be made to support Liberia to restore electricity to the West African country that was engrossed in numerous years of internal conflicts.

President Mahama said Ghana through Volta River Authority and GridCo would also help train the Liberian technicians in power generation and extension to restore the damaged power generators that were affected by the prolonged conflicts.

The Ghanaian President said a Memorandum of Understanding would soon be signed on those issues as part of the regional partnership programmes.

On security, President Mahama said they had also agreed to come out with a regional decision that would help to ward off terrorism and other security threats on the continent.

He said armed forces collaboration also came up for discussion and with Ghana's experiences in various sectors of the military and peace-keeping programmes, would help Liberia to re-build their army in the coming days.

President Sirleaf on the other hand commended Ghana for her support to Liberia over the years, mentioning the Accra Peace Talks during the Liberian conflict as one of the landmark contributions Ghana made for the restoration of peace and harmony in Liberia.

She said Ghana has been helpful to Liberia in several areas including energy, infrastructural development and mining sector and Monrovia would continue to seek her support to harness their potentials in those areas for development.

She said although numerous Ghanaian companies were already in Liberia to support their re-building exercise, there was the need for more partnerships because of Ghana's vast experience in infrastructural development, energy and the mining sectors.

"We have so many Ghanaian companies working especially on our roads, and we shall continue to collaborate effectively with Ghana because of your experiences in infrastructural development, energy and the mining sectors."

The Liberian leader who paid a similar visit to late President John Evans Atta Mills in 2010 has since returned home.