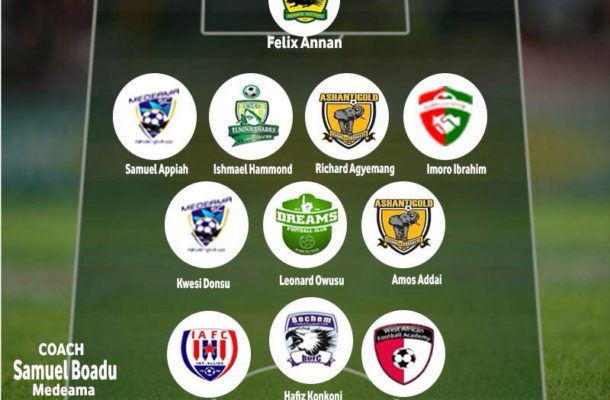 The first round of the 2017/18 Ghana Premier League officially ended over the weekend as teams huffed and puffed to get as many points as they could before the end of the first round.  Many players have established themselves as indispensable members of their clubs while others have caught all and sundry with their stupendous consistent display in the course of the round in many and various ways.

There are still some few outstanding games to get out of the way but that notwithstanding, here’s the BEST XI after the first round of the 2017/18 season.

Goalkeeper – Felix Annan (Asante Kotoko): With 3 MVPs in the league, Felix Annan, 23, needs no introduction. He has won the club’s best player for three successive months. Annan has continued from where he left off last season. He has kept 5 cleansheets and is currently the best goalkeeper in the country.

Did you know? Annan is just one of two goalkeepers in the league to have started every game for their club this season.

Samuel Appiah (Medeama SC): The enterprising fullback has been a mainstay for the record-breaking Mauves and Yellows in the first round of the league. Signed to understudy the highly rated Amos Korankye, Appiah has surpassed all doubts and is now regarded as one of the best right-backs in the topflight. He has thrilled fans with his performances and is now one of the first names on the teamsheet.

Did you know?  Appiah, 24, signed from Phar Rangers as backup made his debut in Week 2 against Bechem United for the injured Korankye, but has now locked down a starting spot.

Ishmael Hammond (Elmina Sharks): After his contract with Medeama was terminated last two seasons for being not-so-good enough, Hammond has evolved into a powerhouse in defence. He has been one of the better performers for Elmina Sharks, though the club has largely struggled recently. He has been fine-tuned by coach Yaw Acheampong.

Did you know? A product of Red Bull Academy, Hammond, 24, has featured in all but one game in the first round

Richard Osei Agyemang (AshGold): Another one discarded, this time by Asante Kotoko. Agyemang has won 2 MVPs this season. He has been one of the reasons AshGold have yet to concede at home. He showed glimpses of his talent when he joined Kotoko but patience is a rare virtue for the Porcupines as they could not wait enough before shipping him out.

Did you know? Osei Agyemang, 23, has scored 1 goal and won 2 MVPs this season, while helping AshGold record the third highest number of cleansheets, 6.

Imoro Ibrahim (Karela United): 18 year-old Imoro Ibrahim has seen his stock rise over the past two seasons. Joining newly promoted Karela from relegated Bolga All Stars, Imoro has registered 2 goals from defence and has won 1 MVP award. He has won the admiration of fans and pundits with his industry down the left flank and a thunderous left-foot.

Did you know? Ibrahim has scored 2 goals this season and won the MVP when his club traveled to record a historic victory at Wa All Stars, he scored the only goal from bench

Kwesi Donsu (Medeama SC): Speaking of glorious feet, the subject can’t be treated without paying homage to the iron-footed Kwesi Donsu. Already scoring 3 freekicks this season, Donsu has put in strings of unparalleled performances while winning 3 MVPs. He has netted 7 goals and is on course to breaking a personal record 15 league goals he set last two seasons.

Did you know? Donsu, 22, has scored 13 freekicks since 2015/16 more than any player in the league, he also scored the winning goal to end WAFA’s run of 46 games unbeaten at home.

Did you know? Addai, 22, has scored 2 away goals this season, the joint highest for his club.

Leonard Owusu (Dreams FC):  The captain of the side has been a delight to watch this season. Taking up the mantle of leadership and rallying his boys along, Owusu is a midfield maestro – probably the finest midfielder in the league. He does his defensive duties with aplomb and shows good use of the ball when he joins the attack.

Did you know? Owusu, 21, with 3 goals is his club’s second joint topscorer in the league, meanwhile all goals have come at home; also first player to win 3 successive MVP awards.

Charles Boateng (WAFA SC): Charles Boateng is enjoying his best season yet. Scoring 6 goals and laying on 3 assists, Boateng is finally blossoming and living the hype. He was tagged for big things few seasons ago but trials outside Ghana punctuated his progress but this season has proven Boateng’s talent cannot be overlooked, with his pace and deft touches in the final third.

Did you know? Boateng,20, has been involved in 9 goals this season more than any player from his club.

Hafiz Wontah Konkoni (Bechem United): The trained teacher is the topscorer in the league with 8 goals and is the ultimate gunman. Hafiz has shown his ability to score all sorts of goals. Konkoni, 18, who is playing just his second topflight season has caught the eye of national team directors as he has been tipped to be a member of the national U20 team at some point.

Did you know? Hafiz has scored 8 goals in the league, the league’s topscorer and now has 10 topflight goals.

Victorien Adebayor (Inter Allies):  The Nigerian forward has proven his showings at the WAFU tournament was no fluke. In his first campaign in the Ghanaian Premier league, Adebayor has proven a handful for defenders. Scoring freekicks and howitzers, he’s workaholic and very comfortable with the ball at his feet.

Did you know? Adebayor,21, became the first player to score an away goal for the club after 565 minutes of a barren run.

Coach – Samuel Boadu (Medeama SC):  In his first season in the domestic topflight, Samuel Boadu is proving a master tactician for Medeama taking them to the summit of the log, blending youth and the old players very well. He has by far impressed than any other manager. He has also made the quartet of Eric Kwakwa, Donsu, Rashid Nortey and Justice Blay the best in the country while reviving Kwame Boateng’s ailing career after he was transferred from Kotoko.

Did you know? Samuel Boadu is managing his first team in the domestic topflight campaign after joining from lower side Asokwa Deportivo.