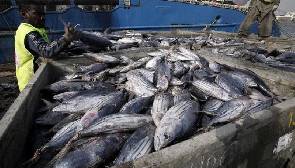 The Minister of Fisheries and Aquaculture Development (MOFAD), Ms. Sherry Ayittey, has underlined the government’s determination to put in place the necessary measures to substantially increase fish export earnings.

Fish is the nation’s second most important non-traditional export after horticultural products.

The Minister put the current earnings at US$1 billion and said the target was to hit US$5 billion.

She said this could only come through massive investment in fish farming ventures by local entrepreneurs to raise production levels.

Ms. Ayittey was addressing a joint meeting with fishermen, fish processors and trader associations from the Lower Manya and Asuogyaman Districts in Akosombo.

She noted that many countries were making so much foreign exchange from fish exports and said Ghana had the potential to become a major player on the world fish market.

She announced that one million fishermen had been selected to benefit from free insurance registration.
 
The government would additionally continue to subsidize duties on outboard motors and provide cold stores in the fishing communities.

Ms. Ayittey said her ministry in partnership with the Ghana Education Service (GES) had instituted a scholarship scheme for children of fisherman and fish processors as part of the drive to eliminate child labour in and around the fishing communities.

The package, she said, involved the supply of free uniform, school bags, footwear and exercise books.

Her ministry again, had concluded an arrangement with the Microfinance and Small Loan Centre (MASLOC) to offer loans to women in fish processing to expand their businesses.

The Minister had earlier visited the Tropo Farms Limited at Mpakadan, to learn at first hand the challenges it had been facing and the way forward.