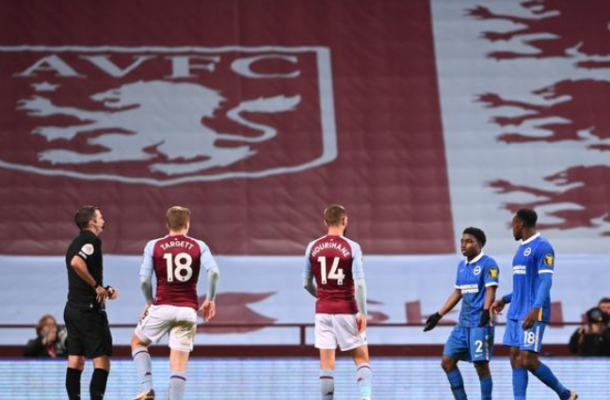 It was a mixed bag for Ghana target Tariq Lamptey as he was very instrumental in Brighton's second win of the season in the English Premier League.

The seagulls defeated high flying Aston Villa by 2-1 at their own backyard after some fine display.

Brighton have played very well this season but have very little to show for on the league table as they have often lacked the cutting edge or crumbled at the last moments of games.

Graham Potter's side celebrated their first Premier League victory since September after Danny Welbeck helped them to a 2-1 win at Aston Villa on Saturday with his first goal for the club.

Solly March also netted a fine goal for the visitors to cancel out Ezri Konsa’s equaliser as Brighton moved clear of the relegation zone with nine points from as many games. Sixth-placed Villa suffered their third successive home defeat.

The pulsating clash had a dramatic climax as Brighton’s Tariq Lamptey was sent off in stoppage time moments before referee Michael Oliver rescinded a penalty he awarded to Villa after a VAR check.

Villa missed a string of chances in the first half and were punished as Welbeck raced clear from inside his own half in the 12th minute and beat goalkeeper Emiliano Martinez with a deliciously dinked finish.

The home side hit the woodwork twice in the opening 45 minutes and Konsa equalised shortly after the break when he slid in at the far post to turn in Bertrand Traore’s free kick.

Villa laid siege to the Brighton goal but were stunned again in the 56th minute when March capped a flowing move with a sublime first-time shot from 18 metres into the top corner.