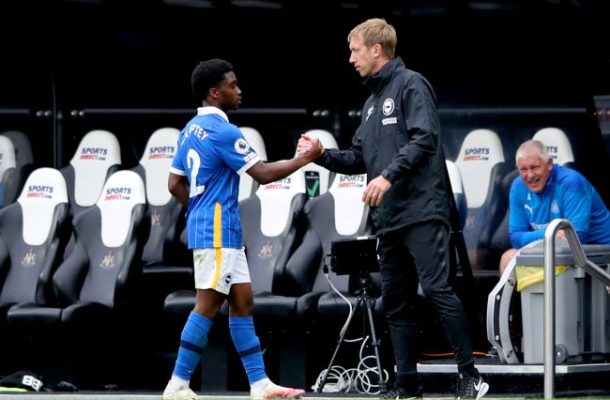 The 19 year old right full back has been in incredible form for Brighton first taking Chelsea's Marcos Alonso to the cleaners in their opening day game against Chelsea as he went past him on countless occasions with his pace and trickery.

He continued from where he left off against Chelsea with an emphatic display against Newcastle at the St James’ Park where Brighton won by 3-0.

The English born Ghanaian set the tone for the victory as he burst into the penalty box before he was brought down by Newcastle winger Alain Saint Maximin fell the 19 year old for a penalty to Brighton.

According the former Chelsea youth team star he is not getting carried away despite praises from almost everyone including former Liverpool defender Jamie Carragher.

Asked about Carragher’s comment, he told Albion TV: “I don’t know what to say. I appreciate all the praise and I’m thankful for it, but I just have to keep working hard and keep focusing, keep putting in good performances for the team.

“The main thing was the team got the win, but it’s great to get high praise from such fantastic ex-players.”

He said: “There were quite a few tackles, but that’s football. You just have to keep getting up, really.”

The English born Ghanaian is a target of the Ghana Football Association and have began talks.