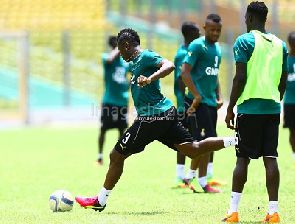 The game will be Ghana’s first game in the group stage of their quest for a fourth successive World Cup appearance. The task is more arduous given the fact that no African team has qualified for the tournament for a fourth straight time.

The world cup qualifying game slated for Octovber 7 will come off at the Tamale Sports Stadium at 15:30.

The Black Stars are winless in their last two matches after drawing with Rwanda and losing to Russia but more importantly, it will be interesting to see how the team will fare following much negativity around the team.

Uganda is still in a jubilant mood after qualifying for the first AFCON in 39 years only a month ago.

The Ugandans have clearly set out the target of excelling in Gabon next year and only see the Ghana game as preparatory ground for the African tournament next year.

HOW HAS GHANA FARED AGAINST UGANDA IN THEIR LAST TWO MEETINGS?

The Black Stars are winless against the Cranes in their last two matches after suffering a defeat in Kampala and being held in Kumasi.

The first of the two meetings was in Kumasi right after the debacle of Brazil. Tony Mawejje gave Uganda the lead before Dede Ayew restored parity for Ghana from the penalty spot.

That was the penultimate game for then coach, Kwesi Appiah. In the penultimate fixture of the 2015 AFCON qualifiers, the Uganda pipped Ghana, under caretaker coach Maxwell Konadu, 1-0 in Kampala.

WORLD RANKINGS:
Ghana has dropped to 5th on the African list and 43rd in the overall world rankings while the Cranes remain 15th in Africa and 65th overall.

This will be Ghana's third game in Tamale.

Avram Grant will be handling his first ever game in Tamale

Asamoah Gyan will be returning to the team since November 2015

"I don't think it will be an easy game but our target is the same, to win and to do everything to be in Russia.We are playing against a very strong side. The most important thing is we finish first in the group.It's a very tough group. All the teams can qualify. It is the group stages. It’s a tough group, all the teams can qualify, but we have our own wishes to be there.
“We are going to face a very tough side and I’m only thinking about football, nothing else. Even if we face some difficulties, the most important thing is to be there on Friday.” “I was in the [World Cup] qualifications with Israel, a small team and we missed qualification by two goals even though we played in a group with France, Switzerland, and Ireland.“So, as you know, one of the reasons I came here is to understand why the [national team’s]achievements don’t match the talent. We have a big target, to do many good things, to be on top of the world, and that journey begins. We have the quality. It will be hot for both teams and not for only Ghana. It's the first time we playing under such a weather but of course, both teams will be playing in it so it is no problem.

"Coming to Ghana is a special occasion for me and the team I am coaching. Whenever I have to come to Ghana in the last 16 years, I have recognized the value of what we are coming to do. I have absolute respect for the coach Avram Grant and your team, knowing how good they are and we expect a proper football atmosphere. We are coming bearing in mind we have succeeded in achieving our strategical target of the year, that’s qualifying for the Cup of Nations for the first time in 39 years. We are coming to Ghana to play our style and hope for a good result. Whoever comes to Ghana and sits back to defend has no chance, Sitting back is allowing an onslaught. We have hidden something which we will put in place on Friday. We are a different team when we play friendlies and different when we play competitive games."

Ghana’s team under Avram Grant will be a pretty straightforward one. Captain Asamoah Gyan returns to the squad after sitting out for almost a year. He last played for Ghana in November 2015.

The striker is expected to be partnered with Aston Villa forward Jordan Ayew in a two prong attack. Dede Ayew’s absence means an extended run on the left wing for Frank Acheampong while the duo of Afriyie Acquah and Mubarak Wakaso are set to remain unchanged with Newcastle wide man Christian Atsu occupying the right flank.

The back four has been fairly settled with the John Boye-Jonathan Mensah partnership set to continue flanked by Harrison Afful and Baba Rahman. It will be interesting to see who picks the number one slot with Adam Kwarasey and Razak Briamah battling it out.

Both men started one each of Ghana’s last two matches. Should the team that featured in both matches give a clear indication, then Kwarasey should be starting for Ghana.

The Serbian has a full strength side ahead of his trip to Ghana and will be hoping for a repeat performance when they came to Ghana a few years ago. Kumasi scorer Tonny Mawejje remains a member of the squad but scored in Kampala, Savio Kaburo. Remains absent from the squad.