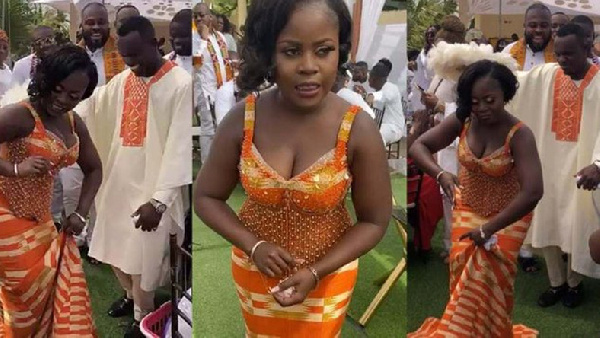 Ghanaian dancehall musician, Grace Kaki Awo Ocansey, known in showbiz as Kaakie, is the first celebrity to tie the knot in 2020.

The man she married is reportedly her high school mate from Achimota Senior High School.

Over a week ago, photos of her bridal shower popped up and went viral on social media.

However, Kaakie’s marriage is now official, with a video showing the singer dancing with her husband during their traditional marriage.

Kaakie has been off the music seen for some years now, having travelled to the UK to pursue higher education in nursing at the Anglia Ruskin University in Cambridge.

Congratulations to the latest couple. Everyone at Pulse.com.gh wishes Kaakie and her husband the best in their union.

Below is the video of Kaakie dancing with her husband during their traditional marriage: