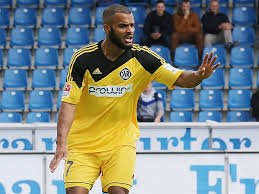 Ghana defender Joe Baffoe has been released by German lower-tier side Eintracht Braunschweig.

Baffo is a casualty of a massive shake-up that has hit the club since the arrival of Newly appointed coach Danes Henrik Pedersen.

A total of fifteen departures have been confirmed by the club.

The gaffer  in his first press conference revealed the club is on the process of rebuilding hence the need to clear the deadweights.

"We want to form a new team and have therefore, after intensive discussions to the squad planning decided not to extend the contracts with the aforementioned players,"

"We have a clear idea of ​​how we want to put the team in the sport of the new season and will also put together the squad accordingly."