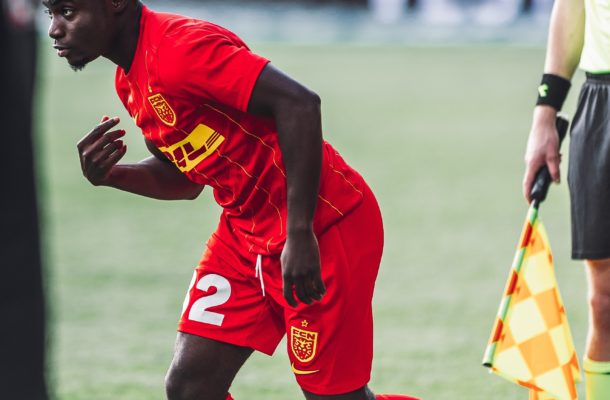 Young Ghanaian defender William Kumado made his debut for his Danish Superlig side FC Nordsjaelland in their league match against FC Midtjylland on Sunday evening.

The 18 year old right back made his first appearance for the Nordjaelland first team in the 2-2 drawn game against FC Midtjylland at the Right to Dream Park.

Kumado has been knocking on the first team door with his impressive outing for the Nordsjaelland U-19 side in the Youth League.

He was introduced into the game in the 69th minute of the game as replacement for Danish defender Oliver Rose-Viladsen.

After recess the away side upped the ante and pulled one goal back in the 48th minute with Junior Brumado the goal scorer before Victor Stange Lind pulled parity for FC Midtjylland in the 62nd minute of the game.

The 18 year old defender joined the Danish side from its sister club in Ghana the Right to Dream Academy in February this year on a long term deal.

He will be hoping that this will be of signs of things to come at the Danish club which has offered a lot of opportunities for Ghanaian talents.