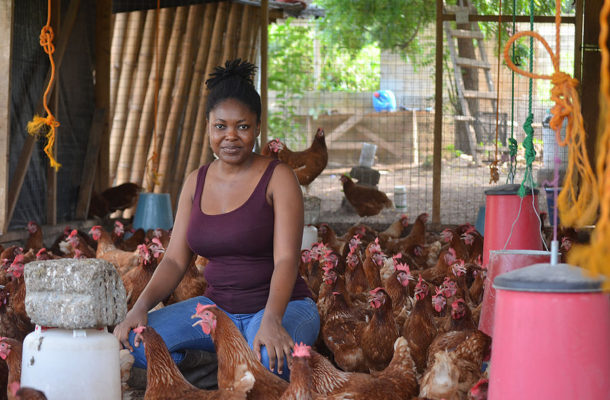 The farming sector in Ghana is predominately occupied by men and Christabel Afrane, is hoping to make a change by venturing into agriculture.

Mrs. Afrane said she bought the birds to prove she practices what she preaches to girls in Ghana: that there is money and empowerment in agriculture; and that when a woman succeeds, everyone benefits.

In Ghana, women produce the majority of food. But female farmers in Africa tend not to reap what they sow, held back by higher barriers to funding, land, and materials than men encounter. It’s part of why so many eke out a living as low-scale subsistence farmers – a trend she’s seen firsthand.

When Afrane’s grandmother, Mary Akua Ago, lost her husband, she had to walk two hours to her farm and back each day – planting, weeding, and harvesting only to feed her family. She used to have a plot close to her home, but when her husband died it went to his family, leaving her no other option to provide food for her eight children.

Watching her grandmother’s struggle, Afrane wondered: “How can you support this woman, or a young girl, who is moving heaven and earth to survive?”

Today, Afrane is on a quest to bring more women into agriculture, and support them once they’re there. When their opportunities grow, so do their profits – along with their yields, and their own ability to lift up other women. She’s not alone: from individuals to international NGOs, there is a growing emphasis across the continent for equality in farming.

They’re not empowering women for fairness alone, they say – though that’s important – but to better feed the world.

Women make up more than half of Ghana’s agricultural labor force, according to a 2014 study from the nongovernmental organization SEND-Ghana, and produce 70 percent of Ghana’s food stock.

But just 10 percent of Ghana's female farmers own land, compared to 23 percent of men, and the average value of women’s land holdings is three times lower. Women are also largely locked out of obtaining financial services, due to limited education and mobility, and other social and cultural barriers, according to the study.

In 2015, when Afrane set up the Kairos Ladies Network, she wanted to forge a new path for women. She goes to schools where she and other female entrepreneurs speak about the benefits of working in the sector, shifting students’ impressions of it from small-scale farms to bigger agribusiness. She also organizes farm visits, including to her own. She believes the encouragement will offer a path to economic independence that could go a long way to ensure future equality, too, and feeding the nation.

On her property on the outskirts of Accra, Ghana’s capital, Afrane’s poultry farm has three sheds where 1,700 chickens and roosters cluck, crow, and lay. She sells about $2,100 worth of eggs each month, and plans to sell some of the chickens at Christmastime – offering a local alternative in an import-heavy sector. The farm has about ten employees – including her husband. It’s a story she hopes will inspire young women to reimagine what “agriculture” means, shifting away from the subsistence farming her own grandmother still practices.

'I see money on the field'

Abena Abedi is a rice farmer – large-scale. She buys about 200 tons of rice each year, supporting 88 small farms in Ghana’s eastern Volta region. Struggling smallholders generally don’t own the land they cultivate; farms are usually two acres or smaller. Ms. Abedi, an agricultural science graduate, provides them with training and technical support – the kind of help she wanted to provide when she first entered the industry.

Today, as a member of the Kairos Ladies Network, she speaks to young women about how they can build their own careers in agriculture. Female farmers’ challenges, in particular, stand out to her, so she focuses on working with them. Women tell her they can now pay school fees, and their livelihoods are improving. But often, she has to justify why she chooses to work in agriculture – which confuses male farmers in particular.

“Sometimes the farmers will ask why I am doing what I am doing. They think I am educated and look sophisticated – more than them – so I could go and sit in some office and stop wasting my time on the field,” she says with a laugh.

“I see money on the field,” she tells the farmers she works with, and works to help them realize the same.

Seeing money in farming is crucial to attract young women. But so is improving the livelihoods of those already in the sector.

In Malawi and Zambia, where women are usually responsible for drying and smoking fish, the IDRC funded solar drying tents, reducing the time women spent watching and turning them. The tents also produce better-quality fish, so women can sell it at higher prices and to new markets.

More women getting their fair share in agriculture is a win for everyone, Dr. Njuki says.

They can also alleviate world hunger, she adds, citing a United Nations report. Giving women the same opportunities as men would increase their productivity by up to 30 percent, improving overall output in developing countries by up to 4 percent – which translates to reducing the number of undernourished people worldwide by 150 million.

She’s excited for the future, especially as young people bring new innovations and technology to the sector. But for young women to progress, they’ll need the resources that have traditionally proven difficult to access across the continent, like land and financing.

“Banks and financial institutions need to see them as business people, not just young women,” she says. “The way they think about collateral for young women and young people generally has to change.”

“What we know now is the future of agriculture is going to be young. The future of our continent is going to be female. There will be more women, whether it’s in agribusiness, whether it's in research or policy, and the more people start seeing women in those places where they had been absent, the more things are going to change.”