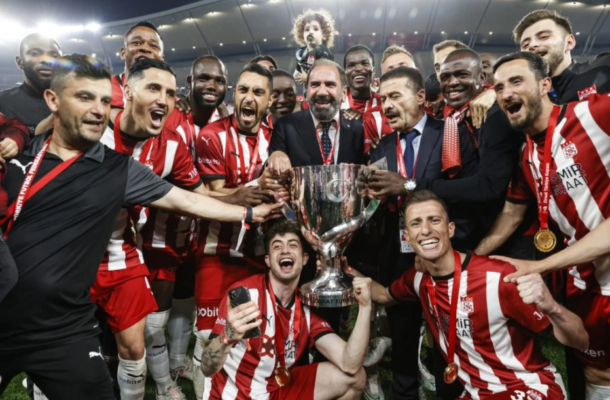 The midfielder was an unused  substitute as  his side defeated Kayserispor in a thrilling 5 goal encounter at the Atatürk Olympic Stadium.

Sivasspor, won its first trophy in the club's history after defeating Kayserispor in the 60th final of the Ziraat Turkish Cup.

The central Anatolia derby, which was played in Istanbul, ended in a 1-1 draw.

Yukatel Kayserispor took the lead in the 38th minute as defender Ramazan Civelek found the net from right outside the penalty arc.

Sivasspor took the lead in the extra time as Gradel's classy shot hit the woodwork and ended up in the net in the 95th minute. Kayserispor equalized in the 107th with forward Ilhan Parlak's header.

Four minutes later, Olarenwaju Kayode slipped through Kayserispor's defense from the right and passed the ball to Pape Moussa Konate, who converted into a goal through a shot in the six-yard box, scoring the winner for Sivasspor.

The 30-year-old made five appearances in the Cup competition, and played 28 times in the Turkish Super Lig.

Sivasspor will face Trabzonspor in the Turkish Super Cup before the start of next season.