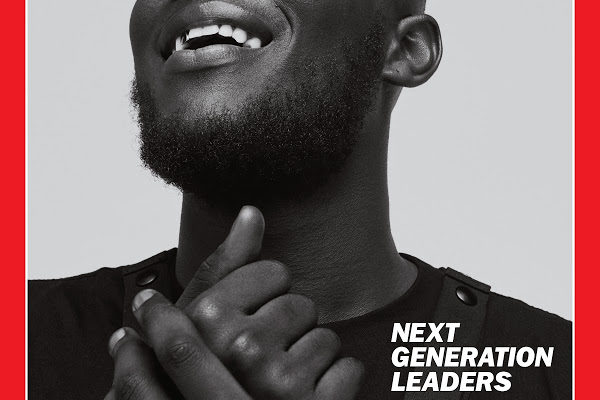 Ghanaian rapper Michael Kwadjo 'Stormzy' Omari has made history by following in the footsteps of his iconic compatriot Kofi Annan after being featured on the cover of the highly revered American magazine Time.

The 26-year-old was named as the headline of the US news weekly’s annual list of young trailblazers in the world who are expected to be influential leaders in future.

The cover of the Time Magazine is normally reserved for globally influential politicians and newsmakers and to be featured on the cover of the highly-respected publication shows the London-born rapper has made global impact.

Stormzy's global acknowledgement is one in a long line of recent milestones for the 26-year-old including his scholarship programmes that is helping black British students to gain admission at the prestigious Cambridge University.

He becomes the second Ghanaian to be featured on the cover of the historic American weekly news publication after the former UN Secretary General Kofi Annan.

Stormzy, who was born to Ghanaian parents in London and speaks fluent Twi, also becomes the first UK rap artist to feature on the cover on TIME Magazine in a huge moment for the Croydon-raised artist, UK and Ghanaian music.

‘I can’t even comprehend this. I am on the cover of TIME.’ He continued: ‘I’ve stared at this cover for a few minutes and it feels like one of those “how the f***kkkk did man get here?!” moments.

“I am deeply flawed and still learning how to be a man and still figuring out how to grow into the person I need to be but within all of that confusion and all the juggling of being a human and trying to be a superhuman – I have purpose. And my purpose has lead me here.

"God’s favour and the ever lasting love and support you guys show me has elevated me to a place in life where this South London kid is worthy enough to grace the cover of the most prestigious publication in the World."

Thanking TIME and God for the ‘huge honour’ of being named a Next Generation Leader, the Vossi Bop rapper continued: "Anyone who knows me knows how much I shy away from being anything other than “Mike”."

He is currently working on the follow up to his debut album, Gang Signs & Prayer.

The “Stormzy effect” has helped inspire record numbers of black British students to study at the University of Cambridge, following the musician’s high-profile backing of scholarships for black students at the institution.

Cambridge said 91 black British students had been admitted as first-year undergraduates at the start of the academic year, an increase of nearly 50% compared with last year’s 61 students. It takes the total number of black undergraduates studying at Cambridge above 200 for the first time.

Last year Stormzy, a grime music star and the first black British solo artist to headline at Glastonbury, announced that he was setting up two scholarships to support black British students at the university, and followed up with an announcement in August that he would fund the tuition fees and living expenses of a further two students.

Cambridge said that after Stormzy made his offer in 2018, the university “has seen an increase in the number of black students engage in its outreach activities and enquire about its courses”, leading to increasing numbers of applications.

Courtney Daniella, a Cambridge graduate and YouTube influencer, was also credited with helping encourage more applications, after she appeared in videos designed to challenge misconceptions around studying at the university.

Cambridge announced a new record in the numberof black, Asian and minority ethnic students admitted this year, with the group now making up nearly 27% of admissions.